“With the VIX volatility – or fear – index standing near its lows for 2019 and the past 12 months, it is easy to see why America’s S&P 500 index is setting new all-time highs and reaching levels 25% above last December’s low. Investor confidence has seemingly returned and done so in style, thanks primarily to the US Federal Reserve’s policy u-turn,” says Russ Mould, AJ Bell Investment Director. “However, some data suggests that while they were right not to capitulate and panic-sell in December investors have yet to fully embrace the rally, because margin debt fell again in March, ending a two-month run of increased borrowing to fund stock trades.

“The latest VIX reading of just 12.3 compares to the index’s long-run average of 19.2 and its November 2017 all-time low of 9.1. The so-called fear gauge has traded below current levels just 14% of the time since its inception in 1990 and the inverse correlation between the VIX and the S&P 500 has held firm this year, with a drop in fear and increase in confidence accompanying a rise in share prices and equity valuations. 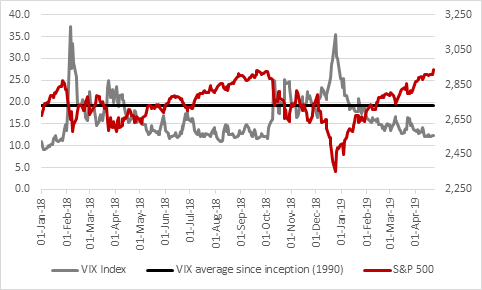 “However, it is possible to argue that confidence has not fully recovered in the wake of last year’s fourth-quarter panic, despite the shot-in-the-arm given to risk appetite by the Federal Reserve’s decision to apparently put interest rate increases on hold for the rest of the year and stop shrinking its balance sheet this coming autumn.

“The latest data from America’s Financial Industry Regulatory Authority (FINRA) shows that margin debt – money borrowed to trade in the financial markets – fell to $574 billion from $581 billion in March. That is some way below last May’s all-time high of $669 billion and the March decrease represents the sixth consecutive year-on-year decline in investor borrowing to fund stock purchases. 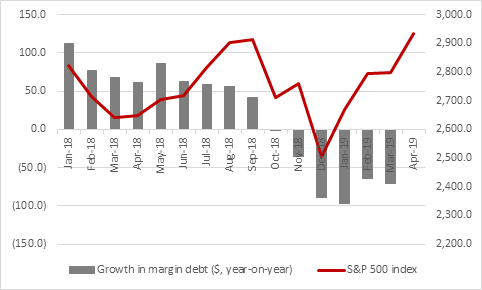 “Peaks in margin debt have historically tended to coincide with peaks in the stock market – although which is the chicken and which is the egg is hard to divine - so the absence of growth in margin debt could be a troubling sign. Equally, bulls of US equities could argue the margin data suggests investors are yet to fully clamber back aboard the rally, with the result that they could take the S&P 500 higher still if they finally do so, fuelling another possible melt-up – although whether that would be a good thing is also open to debate.” 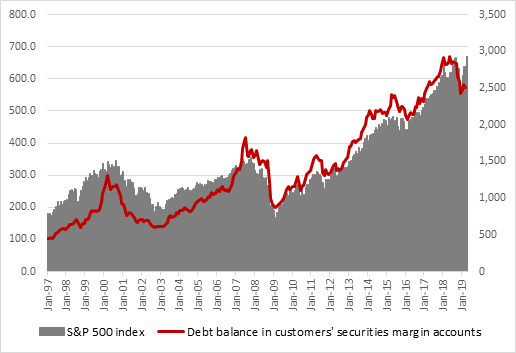