“Shares in Standard Life Aberdeen are up today, largely thanks to the absence of a dividend cut – the firm has actually increased the distribution for 2018 and then targeted an unchanged pay-out of 21.6p per share going forward as it continues to implement its plan of becoming a pure-play asset manager. This puts the stock on a yield of 8.6% for 2019, one of the ten highest in the FTSE 100, which may catch the eye of income-seekers,” says Russ Mould, AJ Bell Investment Director.

“Yet that 8.6% yield also reflects the capital risks that investors believe come with holding the shares, since they are demanding such a fat return to compensate themselves for a range of potential dangers – including a dividend cut. Investors had been bracing themselves for a cut from Aberdeen Asset Management before it welcomed Standard Life’s embrace and while today’s statement may offer some reassurance investors will still be on a state of alert.

“Earnings cover for the dividend is thin and pressure on fees, from customers, competitors and the regulator alike, as well as ongoing fund flows, will not help in this regard. A sudden stock market lurch lower, hitting assets under management, would be a further challenge to the company’s near-term earnings power.

“Although the change in group structure in 2017 muddies the comparison a little, Standard Life had increased its dividend every year since its 2006 flotation, so that proud record is now coming to an end in 2019. 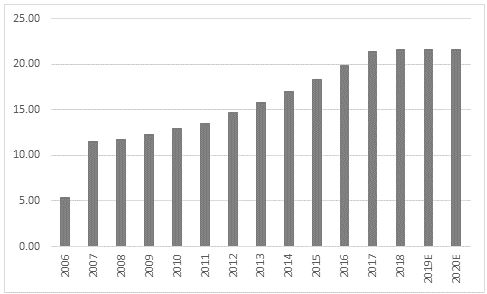 Source: Company accounts, based on stated numbers at the time

“The end of that streak is therefore in itself an admission that all is not going as well as hoped and investors will remember only too well how a move to an unchanged dividend at Tesco (2012-13) and Pearson (2016) after a long sequence of consecutive increases merely proved to be the precursor to big cuts and a share price collapse. 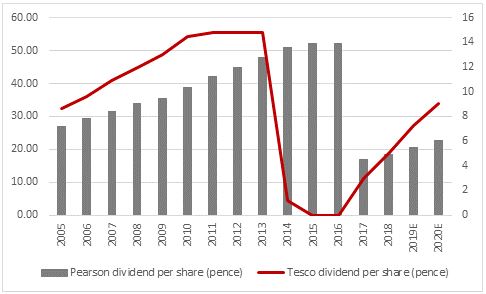 “It may be cold comfort but at least you could argue that Standard Life Aberdeen’s share price has already plunged, given the fall 40% fall since the merger took effect in August 2017. As such a hefty cut in the dividend is at least partly priced in, even if management continues to fight against such an outcome.”