DIY specialist Kingfisher is having to reply on self-help plans and cost-cutting to meet analysts’ forecasts for the year to January, as a disappointing second-quarter trading update reveals a further deterioration in like-for-like sales growth.
17 August 2017
Share:

The shares slipped 5% in early trading, taking the stock to the bottom of the FTSE 100.

“It is still relatively early days for the five-year turnaround programme outlined by chief executive Véronique Laury in January 2016 and investors should resist the temptation to be too hasty in their judgement of the plan,” says AJ Bell Investment Director Russ Mould.

“The second half should be a good test, however, of the progress being made, once Kingfisher irons out its product availability problems, especially as France’s economy seems to be finally showing some positive momentum.”

Kingfisher announced a 1.9% drop in like-for-like sales on a constant currency basis, the second consecutive quarter of annual decline. 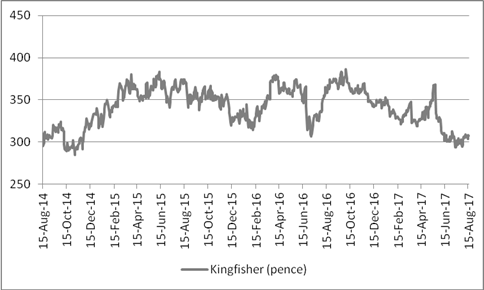 France was again weak, as like-for-like sales in constant currency terms at the Castorama and Brico Dépôt operations fell by 3.8% year-on-year.

At least that represented a lesser decline than those seen in the prior two quarters. The most unwelcome news was a 1% like-for-like drop in the UK, where Screwfix performed strongly (to vindicate the plan to expand the brand’s physical footprint to complement is website) and B&Q did poorly.

Véronique Laury attributed some of B&Q’s woes to the unreliable British weather although the boss was again forced to acknowledge some product availability issues across the group as Kingfisher looks to move toward supplying unified products rather than regionally-adapted ones. The good news is that availability is now said to be “approaching normal levels,” so this will make the second half of good test of this particular part of the turnaround plan.

Investors initially enthusiastically welcomed the ONE Kingfisher plan which had two key thrusts:

Dogged by concerns over underlying trading, the shares have now slumped to their lowest level since late 2014 and they have done so even as Kingfisher has spent £368 million of the planned £600 million buyback.

The failure of this largesse to support the shares raises further questions over whether buybacks are a good value of creating long-term value for investors or not.

There are four strong arguments in favour of buybacks.

However, there are four strong arguments against buybacks too:

It may therefore be worth heeding the words of master investor Warren Buffett from his 2012 letter to shareholders in his Berkshire Hathaway investment vehicle.

“Charlie [Munger] and I favour repurchases when two conditions are met: first, a company has ample funds to take care of the operational liquidity and needs of its business; second, its stock is selling at a material discount to the company's intrinsic business value, conservatively calculated.”

As such investors should not take a buyback as being good news at face value.

The should analyse the source of the money used to carry it out (internally generated cash flow or debt) and whether the company is applying any valuation discipline to the levels at which it is prepared to buy back stock or not.