“Lyft is already encountering its first prang as a public company, since the ride-sharing firm’s stock closed its second day on the public markets 23% below their flotation-day high of $88.60,” says Russ Mould, AJ Bell Investment Director. “Attention is already switching to how the company can justify its enormous stock market valuation, given that in 2018 it managed to turn $2.2 billion of revenues into a $911 million loss, equivalent to a deficit of $1.47 for every one of the 619 million rides its offered to customers.

“At some stage, Lyft will need to turn a profit and generate cash if it is to live up to the hype and that does not look likely for the next few years, judging by the company’s historic financials, its strategy as outlined in the prospectus and management’s comments during the initial public offering roadshow.

“This means Lyft could become the latest test-case for the Hype Cycle concept devised by consultants Gartner Group, to assess how new products and services are launched, adopted by customers and eventually reach maturity (assuming their developer lasts that long). 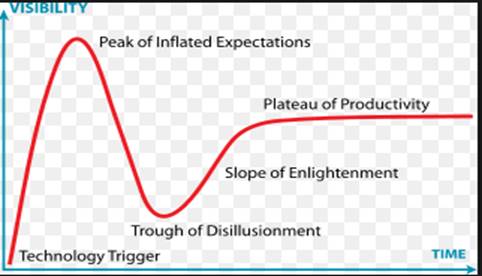 “Gartner’s research applies to the actual products and services on offer but it could be just as easily be applied to the share prices of firms that have floated on the stock market as they seek to achieve mass-market adoption of their would-be disruptive offering.

“One firm whose stock market history seems to fit the Gartner pattern perfectly- whereby a surge of initial excitement gives way to disappointment and possibly even the abandonment of hope before the concept finally proves itself to the benefit of users, company staff and shareholders is Amazon.com.

“You might not think so at first, when you look back at the company’s share price history since its May 1997 flotation at the equivalent of $1.50 a share. (The actual listing price was $18 but the company split its stock three times in 1998 and 1999, with the ultimate result that one original share became 12 shares). The shares now change hands for $1,814 apiece after all. 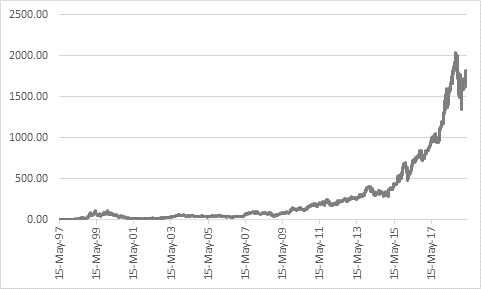 “When the tech bubble burst, shares in Amazon plunged as faith in early-stage, loss-making companies collapsed amid the panic. After hitting a peak of $105 in April 1999, Amazon did not hit bottom until September 2001, when the shares reached $5.97 for a loss of 94%. Anyone who stuck it out had to be patient as it took until October 2009 for the shares to get back to $100. 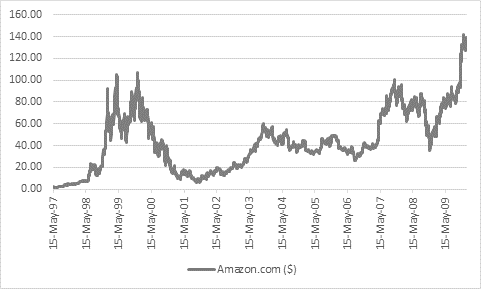 “Amazon is now turning its strategy and competitive position into profit in earnest, since its $10 billion net profit in 2018 was its best result ever and the consensus analysts’ forecast is for this figure to reach $30 billion in 2021.

“In fairness even that sort of rapid progress may be required to justify its near-$900 billion market cap, especially as Amazon’s aggregate net profit over its first 21 years as a public company is just $18 billion. 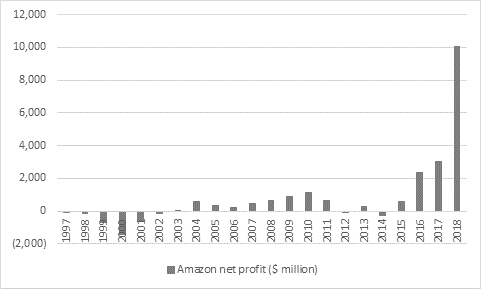 “Patience has paid off at Amazon - thus far - but it took a long time and the jury is still out at a number of other would-be technology disrupters.

“Twitter’s share price has thus far followed the Gartner hype cycle in classic fashion as the firm has struggled to turn its 126 million average daily users into profit and cash flow on a consistent basis. For the first quarter of 2019, chief executive Jack Dorsey has forecast that revenues of around $745 million will turn into operating profit of around $20 million, using the mid-point of his guided range, for a feeble 2.6% operating margin. Twitter’s $25 billion market cap needs more support than $20 million of profit every three months in the long run and a crowded social media field still raises questions over whether Twitter will prove strong enough and useful enough to truly monetise its customer base. 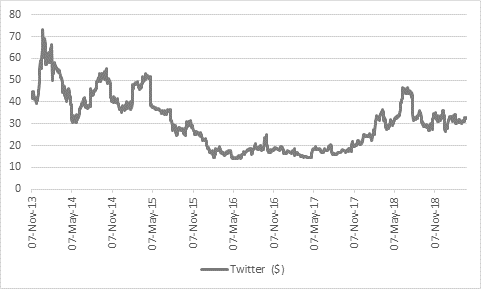 “Music-streaming service Spotify broke into the black in the fourth quarter of 2018 monthly average user numbers reached 207 million but the firm is still locked in combat with the big music labels and profits could be volatile as a result. The share price is now hovering just above its $132 listing price, and nearly 25% below its summer highs, after almost a year as a public company, although Spotify continues to show much higher user numbers than key rival Apple Music, so patience could pay off. 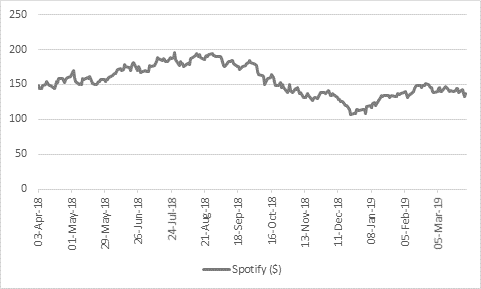 “One firm that seems to be having a tougher time living up to initial expectations is Snap. The shares floated at $17 and closed at $24.48 on day one but it has been downhill all the way since then as Snap has disappointed with its user growth and red ink has continued to flow: in 2018 revenues of $1.2 billion turned into a loss of $1.2 billion. Barriers to entry here are low and Snap has some formidable rivals to confront in the form of Facebook’s Instagram to name but one. 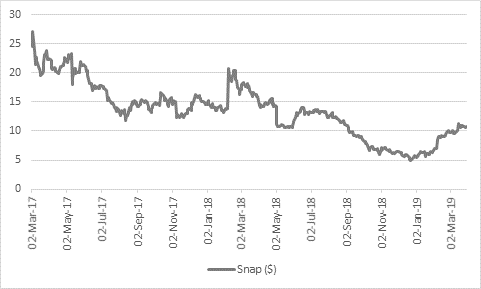 “One much-hyped firm which is struggling to make it at all is meal-kit delivery services Blue Apron. The shares came at $10 and have never seen that level again, not least because competition in this area from the likes of Hello Fresh and Amazon remains red hot. Enthusiasm for this stock has clearly cooled and if the shares stay below $1 for too long they face the risk of being delisted by the New York Stock Exchange. 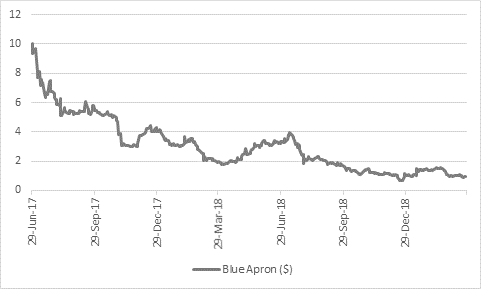 “Lyft has been public for just two days and any buyer of the stock is going to have to take a very long-term view, as to how direct competition with Uber and indirect competition with all other forms of transport, private or public, play out; how the regulatory environment develops; how the company progresses its overseas expansion plans; and whether new rivals appear.

“Lyft could yet revolutionise transport but shareholders will need to be patient and brave, with profits seemingly many years away and expectations already very high, judging by the company’s $20-billion-plus market capitalisation.”