“Michael Gove has finally unveiled his ‘Levelling Up and Regeneration’ Bill, the centrepiece of this Government’s stated aim of spreading prosperity and opportunity to all corners of the UK.

“The Bill will create a legal duty for ministers to set and report on a number of ‘missions’ designed to address inequality.

“These include closing the pay and productivity gap between the richest and poorest areas, eradicating child illiteracy, improving local transport and, perhaps most ambitiously, closing gaps in healthy life expectancy.

“The gaps in healthy life expectancy between different regions of the UK are staggeringly large. People are not only expected to live much longer in certain parts of the country, but also to spend much more of their life in a state of good health. A male born in Blackpool, for example, can expect to live just over 53 years on average in good health – almost 13 years less than a male born in Westminster.

Big problem but what’s the solution?

“While the problem of healthy life expectancy inequality is clear, the solution – or more likely solutions – are not.

“There are lots of different factors that affect how long we live to varying degrees, including lifestyle, income, wealth, education and availability of healthcare.

“Many of these factors are also interconnected. For example, if someone is able to increase their earning power, they might be more able to afford private healthcare. The ability to earn a decent wage is also, on average, affected significantly by levels of education.

“It is therefore unlikely a single solution will solve the great life expectancy and healthy life expectancy divides we see between different parts of the country. Deep structural reforms across all parts of the UK’s economic and social framework will be required if this core ‘levelling up’ mission is to be achieved – something that is likely to take decades.

“It is, to put it mildly, a colossal task. But measuring progress on healthy life expectancy inequality is a crucial starting point and should help focus minds on one of the biggest challenges facing policymakers today.”

A story in two graphs: How male healthy life expectancy has shifted in Westminster and Blackpool since 2011 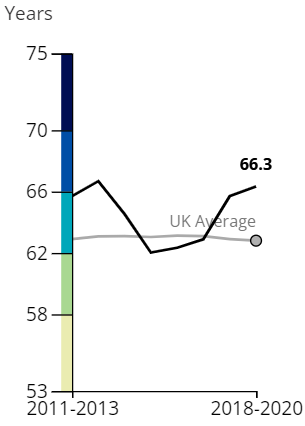 …while in Blackpool male healthy life expectancy has plummeted to 53.5 years. 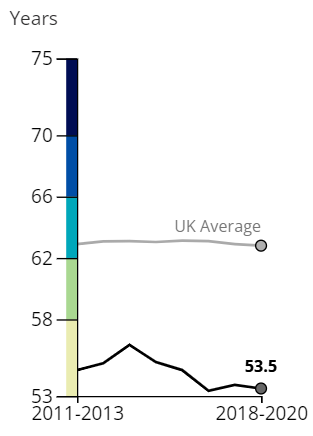