“Today’s confusing and messy set of non-farm payrolls, wage growth and unemployment numbers will not make the US Federal Reserve’s job any easier when chair Jay Powell and his colleagues next decide monetary policy on Wednesday 20 March,” says Russ Mould, AJ Bell investment director. “The number of new jobs created collapsed from 311,000 in January to just 20,000 in February, yet wage growth accelerated from 3.2% to 3.4% and the unemployment rate fell from 4.0% to 3.8%. It’s enough to make you wonder whether the seasonal adjustments mean the initial estimates for the numbers are worth that much, given that they could well be open to revision. 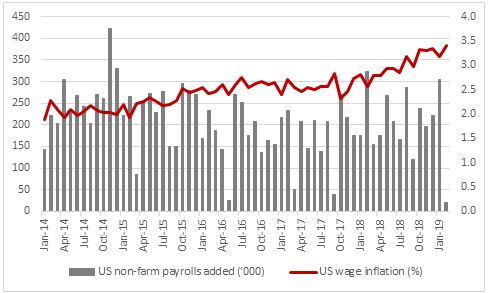 “Ordinarily the drop in unemployment on the headline US measure to 3.8% and acceleration in wage growth to the fastest rate since April 2009 would have the Fed reaching for a tenth interest rate increase of this upcycle and persisting with its Quantitative Tightening programme, as the central bank cuts its bond holdings by a maximum of $50 billion a month.

“Even the U6 rate came back down sharply – this figure includes those who are working part-time but would like a full-time job and cannot get one. That undoes the big jump in January but both numbers look odd as the 311,000 jobs surge saw the headline unemployment rates rise and then a 20,000 gain in February saw the fall. It just looks odd. 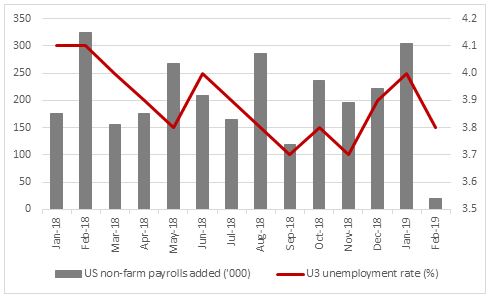 “Such confusion is likely to give the Fed every reason to maintain its pause on interest rates, something which markets are already anticipating. According to CME Fedwatch, there is a 96% chance of no change in rates at 2.50% on 20 March and a 75% chance of them being unchanged by the end of the year – and there is now a 23% chance being put on a rate cut.

“The data may also persuade the Fed to bring its Quantitative Tightening programme to an end and the markets will be looking to Mr Powell for hints on when and at what level it may do so.

“In response to the Great Financial Crisis and then patchy economic growth, the US central bank cut interest rates from 5.25% to 0.25% and expanded its balance sheet from $0.9 trillion to $4.5 trillion.

“It has so far got rates back to 2.5% and trimmed its bond holdings back to $4.0 trillion, so if it pauses on rates now and halts on QT later this year then policy is going nowhere near where it was before the 2007-09 crisis.

•        What is the Fed so worried about, that it feels it cannot continue to try and normalise monetary policy? The Fed, is, in fairness, doing fairly well with its twin mandates of employment and inflation so what does it see that maybe we do not?

•        And if the Fed stops tightening policy is this a signal for stock markets and other risk assets to head off the races again? That is what has happened so far this year for sure, but can it continue if the underlying fundamentals of economics and corporate earnings are as weak as the need to stop tightening policy suggests?