A flat interim dividend, the abandonment of both the share buyback scheme and special dividends and a restructuring programme at home and abroad shows that Marks & Spencer boss Steve Rowe is sensibly focusing on managing the underlying business rather than just the reported numbers.
8 November 2016
Share:

A 20% slide in the shares during his first six months in office is a clear sign to Rowe that investors want to see more than gimmicks like buybacks and special dividends if they are to show interest in a stock which is trading at May 1992 levels, when Sir Richard Greenbury was still in charge. 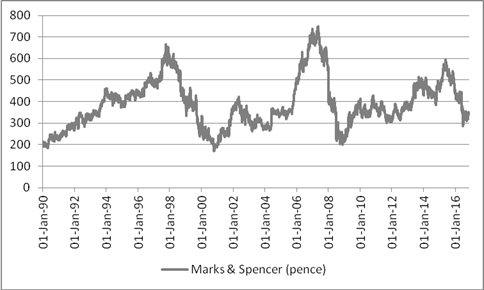 In share price terms that is the worst start to a tenure in office of any of M&S’s last six bosses, so Rowe still has his work cut out.

Operational performance still is not good enough. The rate of decline in like-for-like sales at Clothing & Home improved a 2.9% year-on-year drop was still the sixth in a row and the eighteenth in the past twenty-two quarters.. A 0.9% drop in Food and meagre 0.4% increase at M&s.com show there is much to do. 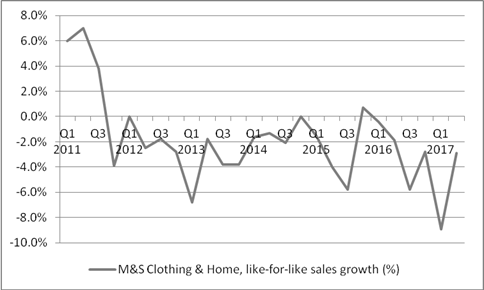 However, Rowe is clearly aware of this. Although M&S shaved its gross margin guidance lower, this is largely currency related and improvements in buying and stock availability are helping. In addition, the new boss has outlined a vigorous restructuring plan:

Cost-cutting will help to support earnings forecasts but this will only take M&S so far – to truly revive profits (which according to consensus forecasts for 2017-18 pre-tax profit will come in below where they were a decade earlier) the company must get Clothing & Home right and it is currently hard to argue that M&S has truly found its fashion handwriting.

Alternatively, Rowe might get lucky and be able to ride a stronger economy higher. This looks unlikely at the moment but as the chart below shows an improvement in consumer confidence could at least provide him with valuable breathing space while the new boss implements his turnaround plan.