If you are covering M&S’s trading update today, below is a comment from Russ Mould, investment director at AJ Bell:

“Investors’ initially welcomed the long-awaited return to growth at Marks & Spencer’s Clothing & Home operations.  However, the realisation that the 2.3% like-for-like gain came against a very soft base for comparison and Steve Rowe’s move to get his excuses in early for the fourth and final quarter combined to weigh on the shares, which quickly shed nearly all of their initial gains.

“Shares in the high street bellwether surged by 4% at the opening after M&S unveiled year-on-year, like-for-like sales growth of 2.3% for the October-to-December period.

“Food again performed solidly and M&S.com put in an improved performance but the shares lost their initial momentum for two reasons.

“Rowe therefore continues to diligently manage market expectations as well as the company, where he is undeniably making changes. Overseas operations are being closed or rationalised, top-heavy management teams pruned back at headquarters, pricing points cut, clothing ranges overhauled and sub-brands de-emphasised.

“It will take time for these moves to have an effect and the appalling sequence of sales figures he inherited makes it clear that the relatively new chief executive does have a big job on his hands.” 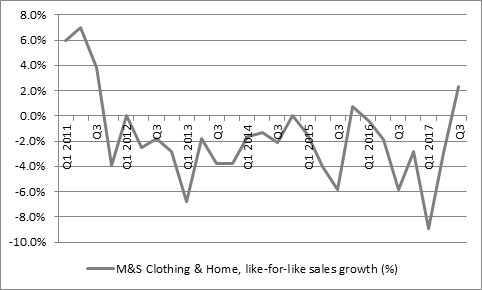