New analysis shows the US Federal Reserve needs to tread very carefully when implementing the next interest rate hike if it wants to avoid unsettling a buoyant stock market.
30 January 2017
Share:

“This year could see the latest test of the old saying “three steps and a stumble” as the US central bank considers the timing of the third hike of this upcycle.

“Market lore has it that the third interest rate increase of a cycle is the one that really starts to start share prices, as increased returns on cash and rising bond yields start to tempt investors away from equities.

“Analysis of the seven rate increase cycles seen in the USA since 1970 suggests the old saying has more than a grain of truth in it, something that should put investors at least on a state of alert as America’s S&P 500 flirts with new record highs and US stocks trade at near peak valuations on market-cap-to-GDP basis.

“The data clearly show that the S&P 500 has historically traded strongly into the first rate hike but then has lost momentum as monetary policy has been tightened making little or no progress, on average, for the 12-month period that followed increase in headline US borrowing costs.

“Besides the fact that history is no guarantee for the future, bulls of US equities can take solace from three other trends:

“For the moment, the market is putting a 4% chance on a Fed rate rise on Wednesday, a 44% chance on an increase by June and only a 24% chance of the central bank delivering all three of its targeted hikes, which would take rates to the 1.25% to 1.50% range.” 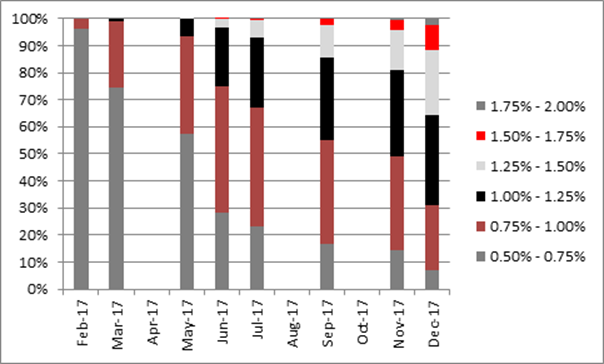