“A perfectly solid set of interim results from Vimto-maker Nichols contrasts sharply with the distinctly downbeat outlook from Irn Bru-producer AG Barr and raises further questions over whether there is more to the Scottish firm’s disappointment than the weather north of the border,” comments Russ Mould, investment director at AJ Bell.

“Granted, Newton-le-Willows headquartered Nichols does have a different geographic mix to its sales of brands such as Vimto, Levi Roots and Feel Good Drinks. In the first half, Nichols generated a fifth of its sales overseas and revenues outside the UK grew by nearly 30%, helped by a doubling of sales in the Middle East, where a plunge in sales in Yemen has been a handicap for the past couple of years. Even so, UK revenues rose 6%, higher than the 4.1% growth for the overall market, according to data from Nielsen.

“By contrast AG Barr expects sales to drop 10% in the 26 weeks to 27 July, with the result that management now believes profits will drop by some 20% for the whole of 2019.

“Besides the inclement Scottish weather, Barr also cites last year’s carbon dioxide shortage and the impact of the UK sugar tax. Yet Nichols will have had to face both challenges to varying degrees, although carbonated drinks represented only half of its business in the first six months, and the firm is still looking for adjusted operating profit growth in the low-single-digit percent range. A near-10% increase in the interim dividend suggests confidence in that forecast remains high at the half-way point of the year.

“One feature of the Nichols results which does give a little pause for thought is the drop in operating margin from 20.1% to 18.5%.

“This may reflect investment in ongoing product development, as a result of the sugar tax, and also marketing to maintain brand recognition and defend the company’s competitive position. AG Barr noted it had gone on a volume drive and positioned its soft drinks on a value basis for consumers and it is possible that Nichols and other rivals have had to respond in kind, promoting their wares either through brand, price or both.

“However, an 18.5% operating margin is still an excellent return on sales and one that underpins high returns on capital employed and permits further investment in brand and product to drive future growth. Such strong margins can also drive cash flow which in turn drives dividend payments.

“Nichols has increased its annual dividend to shareholders every year since 2006. And while a dividend yield of 2.4% for 2019, based on consensus analysts’ forecasts, may not look much in the context of a UK market that is yielding more than 4%, such a dividend growth record will almost inevitably drag a share price higher.

“After all, Nichols’ share price was 162p at the end of 2004, as its dividend growth streak began. Had an investor know that the 2018 dividend would be 38.1p, the equivalent of a 23.5% yield on that purchase price, they would have probably snapped your hand off if given a chance to buy the shares.” 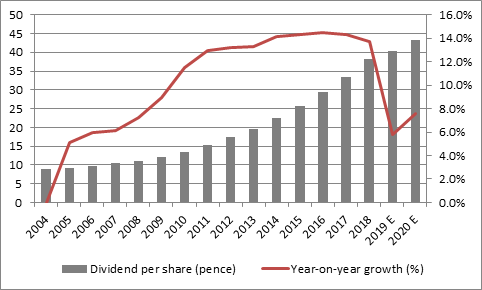