“A second profit warning in three weeks from US retailer Target would have been no surprise to anyone who could read a balance sheet, because the firm’s inventories were growing so much faster than its sales,” says AJ Bell Investment Director Russ Mould.

“Unless customer purchases picked up speed – a risky bet, given surging fuel, food and energy costs – Target was in danger of having to discount those stocks of goods to shift them. A warning on margins as the company focuses on ‘inventory optimisation’ has wider implications beyond just Target. There must now be a chance the retailer cuts back on orders as it manages its inventory bulge, and that will hit manufacturers, transport stocks and potentially the wider US economy. 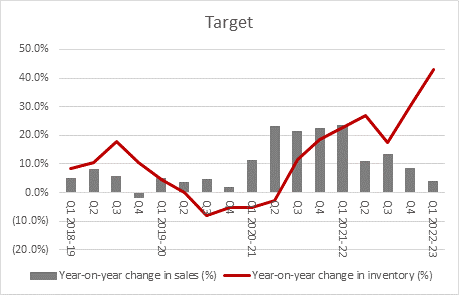 “Target’s inventories of goods on the shelves and in warehouses have outpaced growth in sales for four straight quarters.

“In its fiscal first quarter to the end of April, Target’s sales grew by 4%, or $951 million, year-on-year. The balance sheet shows that inventory rose by 43% or $4.5 billion.

“Something had to give – either revenue growth picked up or Target had to stop buying and start discounting.

“Target has now admitted that it has started discounting and swallowing fines and penalties that result from cancelling orders on its suppliers.

“This combination means management now expects the operating margin to slide to 2% in the second quarter, compared to 5.3% in the first and 9.8% a year ago. 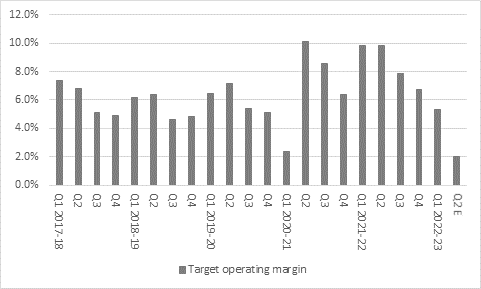 Source: Company accounts, management guidance for Q2 as of 7 June 2022

“It is tempting try and dismiss Target’s woes as a company-specific blip.

“However, industry rival Wal-Mart looks like it might be in a similar inventory tangle. Inventory growth has outstripped sales growth for five straight quarters and between February and April Wal-Mart’s sales grew by 2%, or $3.3 billion, year-on-year, while its balance sheet showed that inventory had surged by 32% or $14.8 billion. 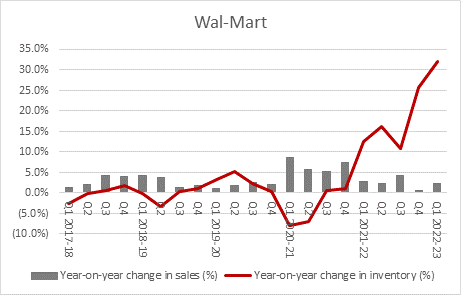 “Target’s share price suggests something is amiss, because it stands at levels last seen in September 2020, when the US Government was handing out stimulus cheques as if they were confetti. Intriguingly, those ‘stimmy’ hand-outs could be seen, with the benefit of hindsight, as the reason why Target’s profit margins were so strong during the pandemic, as shoppers scrambled to spend the money on goods, out of necessity, boredom or their inability to spend it on leisure pursuits and services because they could not leave the house.

“The cheques are a thing of the past, interest rates are going up and inflation is eating away at disposable incomes, so conditions are much tougher for retailers, and efforts to place more orders for goods to sell to overcome supply chain disruption look like they could be about to backfire 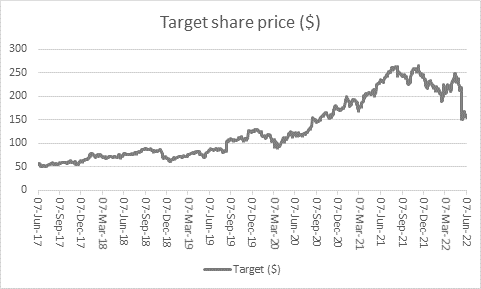 “These inventory woes could have wider implications, for both the US economy and its stock market.

“Private consumption generates about 70% of US GDP so a slowdown here - either a temporary one as retailers whittle down their stocks or a longer slow down in consumer spending - could be a major blow to the US economy and the earnings power of corporate America.

“It is here that the wider danger for American equities also lies.

“Investors may be tempted to make the case that US stocks now offer value after their sharp declines – the S&P 500 index stands some 15% off its January all-time high, so the price (the p) in the price/earnings (PE) ratio is also down by roughly a sixth.

“Based on earnings estimates collated by Standard & Poor’s, that implies US equities trade on 20 times forward earnings for 2022 and 18 times for 2023.

“Those figures are nothing like the more challenging mid-twenties multiples that characterised the S&P 500 before the pull-back, and perhaps suggest that US equities may represent better value, but those ratings are still a little above historic norms. 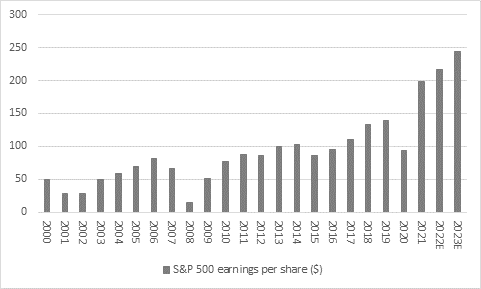 “Moreover, that assumes the earnings forecasts are accurate.

“The latest upset from Target illustrates the potential downside risks to estimates, even if consumer discretionary stocks represent barely 8% of aggregate S&P 500 earnings, compared to the real heavyweights that are technology at 21%, healthcare at 17% and financials at 15%.

“US corporate earnings are forecast to set new record highs in 2022 and 2023 but investors are relying on that just for US equities to look relatively normally valued, not even cheap. If earnings disappoint then US stocks may end up looking less attractive, unless the Federal Reserve or Congress, or both, lose their nerve and turn on the monetary and fiscal taps again.”