“The latest in a long line of profit warnings is painting an ugly picture at digital inkjet printing expert Xaar, which now looks destined to suffer a second straight year of falling sales and losses, with the result that it will burn yet more of its net cash pile,” says Russ Mould, AJ Bell Investment Director.

“Revenue peaked at £137 million 2013, when operating profit topped out at £40 million, as Xaar capitalised upon a boom in demand for printing on ceramic tiles and laminates from China in particular. Shares in the FTSE Fledgling index member peaked at north of £11 shortly afterwards. 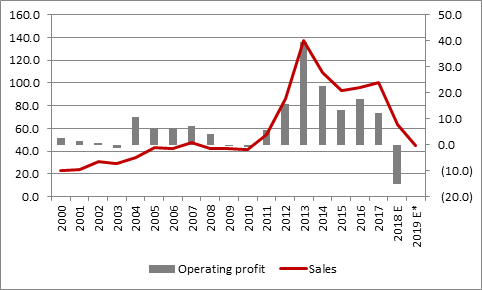 Source: Company accounts. *Based on revenue guidance given on 3 September 2019

“Since then, the market has begun to move away from ceramics and Chinese demand has cooled, leaving chief executive Doug Edwards and his team to develop new markets and manage the transition toward Thin Film printheads.

“Unfortunately, the ceramics market has declined more quickly than expected and adoption of new technologies has been slower than anticipated.

“As a result, Xaar has today announced that first-half sales will come to just £22.5 million against £35.3 million last year. Worse, management does not expect a second-half recovery, with the final six months of the year expected to generate broadly the same level of business. That implies a drop in full-year sales from £63.5 million to £45 million and another year of losses.

“It also leaves the shares languishing at 64p, a level last seen in spring 2009, just before the Cambridge firm last suffered two years of red ink. 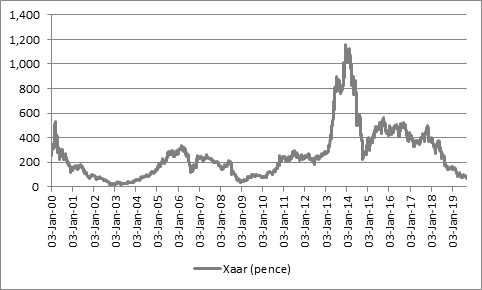 “The good news is that Xaar still has £21.6 million in net cash on its balance sheet, so has no interest bill to pay, even if that valuable resource has dwindled from £69.7 million at the end of 2015. 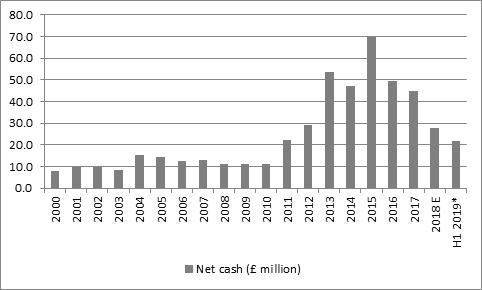 Source: Company accounts. *Based on guidance given on 3 September 2019

“This at least gives the company time and management continues to negotiate with potential strategic technology partners, to help it fund further research and development into Thin Film and High Speed Sintering 3D technology and achieve the scale it needs to compete on a global stage.

“Xaar does have strong technology and any potential partner can take comfort from the fact that the Cambridge-headquartered firm has been here before.

“The current share price of 64p means investors are putting pretty much zero chance on the company returning to its past-peak profit glories and management now needs to deliver on both its review of the printhead business and the strategic partnership(s) to give followers of small-cap stocks a reason to look at it once more.

“Management has delayed publication of the interims from 10 to 26 September as talks continue and hopefully some strategic progress can be outlined then.

“However, hope is not a strategy and, from the perspective of private investors, trading visibility is clearly low at the moment and history shows that profits can be volatile. Operating profit has fallen year-on-year nine times and fallen nine times since 2000.”