•    £30 million returned to savers overtaxed on pension freedoms withdrawals during the final three months of 2018
•    Over £400 million in overpaid tax has now been reclaimed since the pension freedoms launched
•    Average reclaim stands at £2,312 since April 2015
•    Figures don’t include those who fail to fill out one of the three official reclaim forms (P55, P53Z or P50Z)

“HMRC’s insistence on applying emergency tax to hard-working savers’ first pension freedoms withdrawals continues to harm those who access their own money flexibly.

“What these figures don’t capture is those who don’t fill out the forms. Given 150,000* pensions per quarter have been accessed for the first time, it appears far more people either don’t know they have been penalised or are unsure how to go about getting the money back.

“This is hardly surprising given many savers who use the pension freedoms will have never filled out a tax return before.

“This has been going on for almost four years now and the Revenue still steadfastly refuses to properly review its approach. We urge policymakers to think again and work with the industry to find a better solution.” 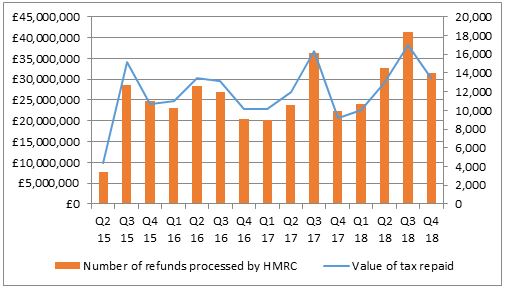