•    Latest HMRC data reveals the net cost of pension tax relief is expected to reach £43.7 billion in 2018/19
•    Figures do not include the tax taken by Government on pension withdrawals
•    Rising upfront cost of tax relief largely driven by automatic enrolment
•    However, average workplace contributions remain too low at just 3.3% according to ONS data

“The Chancellor himself not too long ago described the cost of pension tax relief as ‘eye watering’, and these latest figures probably explain why.

“However this analysis ignores the tax savers pay when they take an income from their pensions – a number which has risen as a result of the flexibilities intruded by George Osborne almost four years ago.

“While rumours of radical tax relief reform will inevitably surface once again in 2019 – particularly in the event of a potentially damaging No Deal Brexit – policymakers need to consider the impact any changes would have on the fragile savings culture being fostered in the UK as a result of automatic enrolment.

“Tax relief is one of the key incentives offered to savers in return for locking their money away until age 55. Raiding tax relief to fund short-term spending could cause people to reconsider the value of this deal, potentially reducing savings levels and storing up more problems for the future.

“Savers should be asking themselves whether they are getting their fair share of this £40 billion Government giveaway and consider increasing their pension contributions if not.” 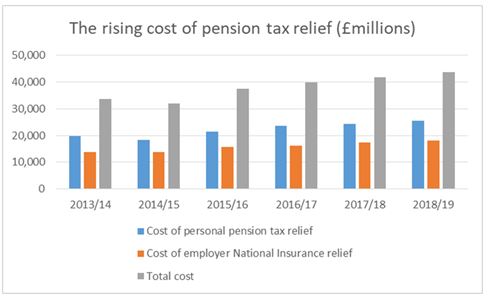