Pension transfer volumes continue to decline across the market

•        Pension transfers across the market dropped over 20% in Q4 2018, from £8 billion to £6.3 billion
•        £92 billion pounds has been transferred since the pension freedoms launched in April 2015
•        Vast majority of this is down to people quitting their defined benefit (DB) pension schemes
•        Gradual slowdown in transfer activity expected as advice supply drops and number of DB members falls

“The latest official data from the ONS suggests we may well have passed the peak point when it comes to pension transfer activity.

“Nonetheless it is hard to overstate the magnitude of what we have witnessed since the pension freedoms were introduced, with almost £100 billion of retirement pots transferred by the end of 2018. The vast majority of this activity is likely to be savers ditching their defined benefit schemes in favour of the flexibility of defined contribution.

“A number of factors are contributing to the recent slowdown. The FCA’s increased focus on the market has undoubtedly had an impact, forcing a number of advisers to exit the market. Rising insurance costs for advisers is also affecting supply, with a knock-on impact on the volume of transfers taking place.

“There were also some significant cases – most notably British Steel – that have skewed transfer volumes upwards in recent years.

“The number of transfers will naturally edge lower as the population of members in DB schemes dwindles. Over time as DB schemes disappear from the retirement landscape, we are likely to reach a point where guaranteed employer-sponsored pensions are practically non-existent in the UK.” 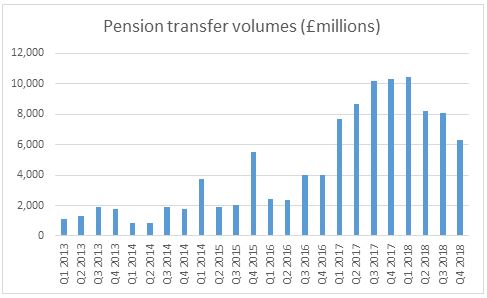