“Today’s High Court ruling that Parliament should get to vote on whether Article 50 is triggered is already sparking a recovery in sterling,” says Russ Mould, AJ Bell’s investment director.
3 November 2016
Share:

“If the British currency can maintain this momentum – and the Bank of England will have a great influence here – then investors may need to reassess their clear preference for dollar earners and exporters and begin to look at downtrodden domestic plays once more.”

“Retailers have been particularly hard hit since the referendum vote in June, amid fears that they would be sandwiched by a consumer spending downturn on one side and a surge in import costs (owing to the weak pound) on the other.

“This is understandable as a long-term chart shows how the FTSE All Share General Retailers sector has tended to do best when the pound is rising (perhaps as this shows the economy is running hot while it also helps import costs) and worst when the pound is falling (and the opposite maybe holds true). 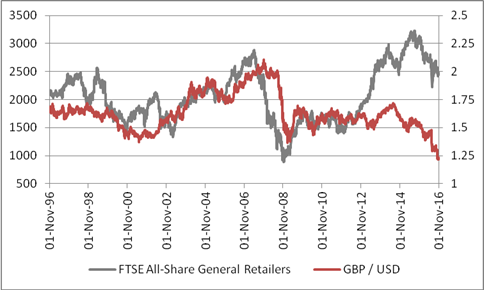 “As a result, even well-run, well-financed stocks like Next have taken a hammering – its shares have plunged from £80 to £51 this year.

“But the stock’s massive de-rating already prices in a lot of bad news, especially as analysts are now forecasting two consecutive years of falling profits from the FTSE 100 firm.

“Next now trades on barely 11 times earnings, a discount to the broader market even on depressed earnings, even while it offers a well-covered dividend yield of 3.6% (with scope for share buybacks, special dividends and dividend increases in the future).

“This is not to say profits are likely to start soaring, especially if the post-referendum, pre-Brexit period is elongated by any legal tussles over just who has the final say on Article 50, but the stock is now the cheapest it has been in a long time and it was interesting to see the share price go up on Wednesday on the back of what was a lukewarm statement.”