“Five profit warnings, a cancelled dividend and two rights issues mean the last few years have been hard on shareholders in Cobham but the decision by the aviation and defence electronics expert’s board to start paying a dividend again in 2019 might suggest that they think better times lie ahead,” says Russ Mould, AJ Bell investment director. 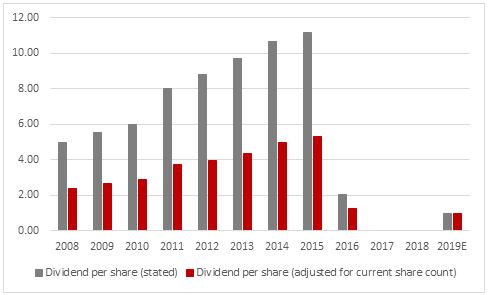 “A dispute with aircraft maker Boeing over a troublesome refuelling systems contract for the US Air Force’s KC-46 tanker has been resolved, the pension deficit is down to £47 million and the balance sheet is now net cash after a pair of disposals. That £10.3 million cash position provides a safety net for patient investors should anything else unexpectedly go wrong.

“A disappointing performance in 2018 from the Advanced Electronic Solutions arm, which provides wireless systems and silicon chips for land, air and sea-based communications systems shows chief executive David Lockwood and team still have work to do – and he is honest enough to admit in today’s outlook statement that 2019 could still see what he calls ‘a range of potential outcomes.’

“But the introduction of a new strategy that targets organic rather than acquisitive growth has to be welcomed, especially as 2014’s $1.5 billion purchase of Aeroflex was the root of so many of the firm’s problems.

“The plan to pay a 1p per share dividend in calendar 2019 also hints at better times ahead, with order intake starting to recover, even if 2018’s stated pre-tax profit figure of £71 million stands way below the £245 million peak that was recorded way back in 2009.”