“The experiences of investors in Acacia Mining highlight both the potential pleasures and perils of investing in gold miners,” says Russ Mould, AJ Bell investment director. “On the upside, a 10% increase in the gold price has helped Acacia’s shares to more than double since the autumn. But Acacia’s share price is trading 67% below its 575p flotation price from nearly nine years ago, even though the gold price is up by 17% in dollar terms since March 2010. 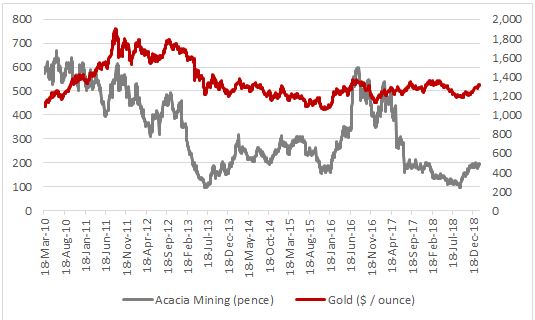 “And while that helps to justify Barrick Gold’s decision to spin off Acacia – then called African Barrick Gold – in a bid to de-risk its operating model, it leaves investors in the FTSE 250 firm with two questions to answer.

“The first is do they still believe in gold and its ability to provide valuable portfolio diversification?

“Disciples of Warren Buffett (who are legion) and Gordon Brown, former Prime Minister and Chancellor of the Exchequer (who may be slightly less numerous), will point out the metal is inert, has limited physical use and generates no yield or cash and thus argue it has little or no intrinsic value at all. This justifies Mr Brown’s view the metal is a ‘barbarous relic.’

“Yet gold bugs will note how the metal has started to rally as global stock markets have wobbled in the last six months, Governments in Europe have begun to back off from austerity and central banks have begun to step away from moves to tighten monetary policy. Although the US Federal Reserve continues to shrink its balance sheet, chair Jay Powell has outlined the circumstances which could persuade the US central bank to halt Quantitative Tightening or even revert to fresh money creation and Quantitative Easing – a scenario which would have gold buyers arguing that the metal offers wealth protection at a time of monetary profligacy.

“The second question, if the answer is ‘yes’ to the first, is do they still believe that Acacia is a good way to play a rising gold price?

“Today’s full-year results featured no nasty surprises although investors’ experiences of the last nine years could easily colour their judgement here. The company is still stuck in a dispute with the Tanzanian government, which leaves the miner unable to export unprocessed ore from the country, with the result that its gold production is forecast to be a quarter less in 2019 than it was when Acacia joined the London market back in 2010. 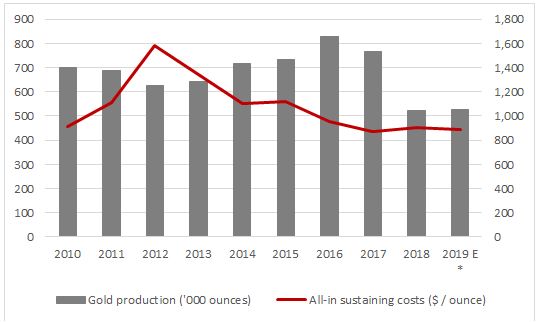 “Sales and profits are also well below prior peaks as a result. 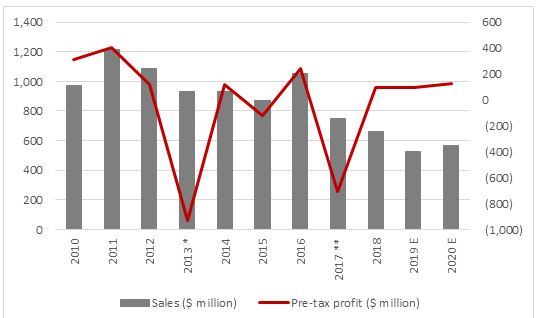 “However, the company continues to manage its costs well – Acacia’s all-in sustaining cost (AISC) is forecast by management to drop to around $890 an ounce in 2019. If a resolution can be reached with the Tanzanian authorities, then the miner would be poised to cash in on any increases in the price of the underlying metal. Chartists suggest that any move above the $1,350 to $1,365 range, which has proved to be the top on several occasions in the past couple of years, could signify a break-out – although a retreat from that mark could again put a lid on the metal.

“Such variables as resource nationalism, ore quality, cost inflation, mine management and even the local weather mean that gold miners can prove frustrating (as Acacia shows). But they are also heavily geared into any sustained increase in the gold price and it does appear as if a lot of investors have given up on gold miners.

“A comparison of America’s HUI Gold Bugs index relative to the gold price (achieved by dividing the value of the index by the price of the metal) suggest that gold miners are pretty much as cheap as they have ever been, relative to the underlying commodity.”