The monthly manufacturing purchasing managers index (PMI) soared to 57.3, the highest reading since November 2013 and comfortably above the last 12 months’ average of 53.8.
2 May 2017
Share:

“A big jump in the latest sentiment survey from British manufacturers may help to calm investors’ concerns about the UK economy after Friday’s disappointing first-quarter GDP growth number, even if the pound’s recent rally may be the next hurdle to overcome.

“The pound’s post-referendum plunge does seem to have coincided with an improvement in sentiment amongst manufacturers (see chart below), perhaps as they feel they will get a boost as their exports prove more competitive, so any loss of that edge could perhaps dampen sentiment if the pound’s recent gains prove sustainable.

“In theory, any PMI score above 50 signifies future growth while any figure below 50 could warn of a future slowdown or even a recession, although this is only a survey of sentiment – it is not hard economic fact (unlike retail sales industrial production or GDP numbers).

“There is no guarantee that a higher PMI reading will ultimately translate into higher employment, higher wages for workers and higher capital investment and it will be interesting to see if the pound’s recent rally has any effect on future readings (and therefore hiring and investment plans)

“Investors’ attentions will now shift toward the construction PMI due on Wednesday and the services figure on Thursday. 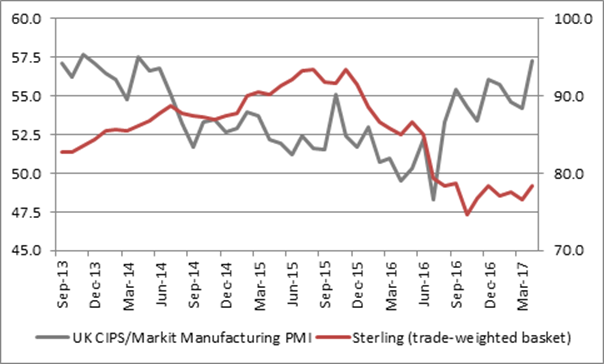 Source: CIPS/Markit and Bank of England