Is a recession on its way?

“Central bankers, politicians, company management teams and the public, quite understandably, continue to fret about oil prices and the impact of inflation on consumers’ ability and willingness to spend is one key reason behind cuts to global GDP growth forecasts by both the World Bank and the International Monetary Fund at their spring meeting in Washington,” says AJ Bell Investment Director Russ Mould. “A slowdown is now the consensus view, but no-one is forecasting a recession yet and since it is unexpected events that move financial market prices rather than expected ones, investors need to be on their guard for signs of stronger or weaker-than-expected growth.

“There are five signals which can be followed quickly and easily (for free) to help investors decide what may be coming next – a rip-roaring (inflationary?) period of growth, a (stagflationary?) slowdown or a (deflationary?) recession.

“The first is the oil price.

“Costly crude is in effect a tax, as it increases costs and squeezes margins and cash flow at companies, and it crimps consumers’ disposable income and their ability to spend. An oil price of $147 a barrel may not have caused the recession of 2007-09 but it may have tipped a fragile, indebted global economy – and febrile, over-leveraged financial markets – over the edge. The oil price shocks of 1973 and 1979 did a lot of damage too, as they stoked inflation and pushed the US toward an economic downturn. 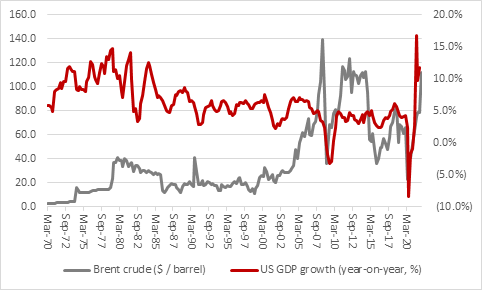 “Crude had nothing at all to do with the US downturn of 2001 (as that was an investment bust in the wake of the technology, media and telecoms bubble). But it seems reasonable to ask the question whether oil is again about to wreak havoc and prompt a recession, or at least stagflation.

“At least the copper price is showing some strength. The malleable, conductive, ductile metal has so many uses in infrastructure, cars, electrical goods, construction and more than it is seen as a good guide to the health of the economy, and hence its nickname, Dr Copper. The good news is the commodity’s price remains strong, despite fears over China’s economy and a slowdown on construction activity in particular. Whether this points to an inflationary or stagflationary outlook is less clear but at least it speaks against a recession. 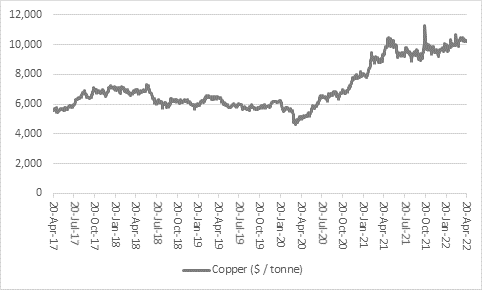 “Far less encouraging is the slump in the Dow Jones Transportation index. This basket of shipping, rail, trucking and airline stocks peaked last November and has badly lost momentum in the past month.

“This will look serious to adherents of Richard Russell’s Dow Theory, and its assertion that the economy, and by extension the Dow Jones Industrials, cannot do well if the Transportation index is not doing well. If the economy is strong and goods are selling, the stocks must be replenished and shipped. If the economy is weak and goods are not selling, then shelves do not have to filled, goods do not have to be manufactured and moved and trucks, planes, trains and ships stay idle.

“So far, the Dow Jones Industrials is doing its best to ignore the Transportation index’s loss of momentum, but this is a trend that requires careful attention. 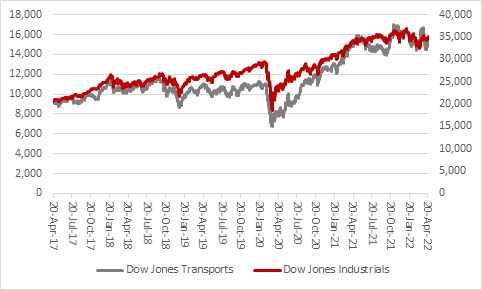 “A slide in small caps, on both sides of the Atlantic, is also a source of concern and at the very least feeds the slowdown narrative, and possibly the recessionary one. Smaller firms tend to be more reliant upon their domestic economy and have less diverse customer lists and ranges of goods or services. As such they may be more sensitive to shifts in local economic momentum that the multi-national megacaps of the S&P 500 or the FTSE 100. 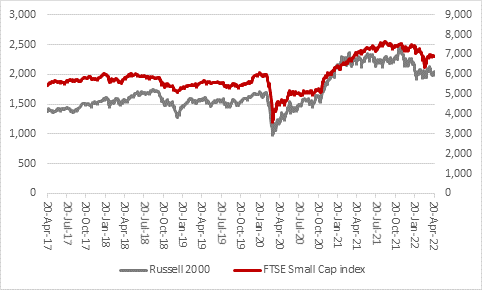 “An even more surprising source of recent share price weakness is the Philadelphia Semiconductor index, known to its friends as the SOX. This benchmark of thirty global makers of silicon chips and chip-making equipment manufacturers is also starting to wobble, despite the well-know global shortage of semiconductors.

“By dint of their very ubiquity, silicon chips are a good guide to global economic activity, as they found in everything from consumer electricals to servers, cars to robots and mobile phones to smart meters. They are also beloved by investors who look for momentum – either earnings, share price or both – and as such can be a good proxy for wider financial market risk appetite.

“Chip producers are ramping up capital expenditure and capacity to try and solve the shortages, but in the event of a slowdown or recession, then the market may reach equilibrium in an unexpected way, namely weaker demand rather than rising supply. Investors in the SOX’s members will therefore be on the look-out for any signs of weakness in key end markets for silicon chips, such as autos, mobile devices, computing and servers, especially if energy, food and fuel prices.

“The SOX’s members are also beloved by investors who look for momentum – either earnings, share price or both – and as such can be a good proxy for wider financial market risk appetite. 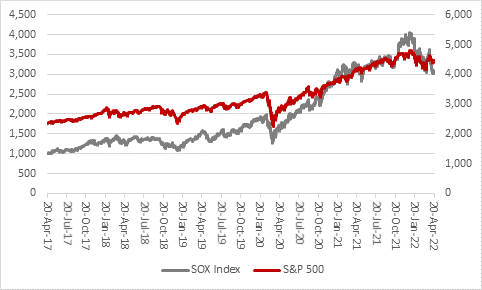 “The economic picture is far from clear cut and, frankly, it if were then share prices would have priced it in and moved on by now. The economy is not the stock market and vice-versa. If a recession does hit, the markets will at some stage decide the outlook is so bad that it can only get better and start to discount an upturn, long before the data show any signs of improvement.

“There is also the potential for policy intervention. Central banks and governments have shown they have little or no appetite for a recession or austerity, or the risk of financial market turmoil spilling over into the real economy. They have quickly cut interest rates or spent money. The difference is this time, inflation is roaring, rates are already low and coffers relatively empty.

“This may be why air is already leaking from some of the stock market’s most speculative areas, as evidenced by the ongoing slide in the price of the US-listed exchange-traded funds which track newly-listed firms who float either by means of an initial public offering (IPO) or purchase by a special purpose acquisition company (SPAC). 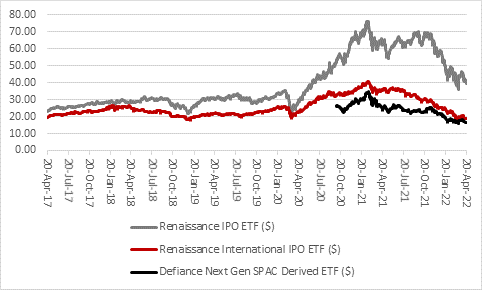 “These areas were red hot in 2021 and have clearly begun to cool in 2022. Even if the economic outlook is far from clear, risk appetite appears to be already dissipating, at least to some degree.”