Health-to-hygiene group Reckitt Benckiser’s interims will soothe fans of the stock but may not fully persuade the sceptics that its growth prospects justify the company’s lofty valuation, especially as life-for-like sales progress remains limited and adjusted earnings figures put a flattering gloss on the first half.
24 July 2017
Share:

“Earlier this month Reckitt abandoned its target to grow sales by 3% on an underlying basis, cutting that to 2% as it cited June’s Petya cyber-attack, changes to India’s tax system and ongoing problems at its Korean operations where one of its humidifier disinfectants was linked to a number of deaths.

“Sales fell 2% on a like-for-like basis in the second quarter, after a flat showing in the first, so Reckitt is still assuming the second half will show marked acceleration although chief executive Rakesh Kapoor does acknowledge the new sales target could still be a challenge. 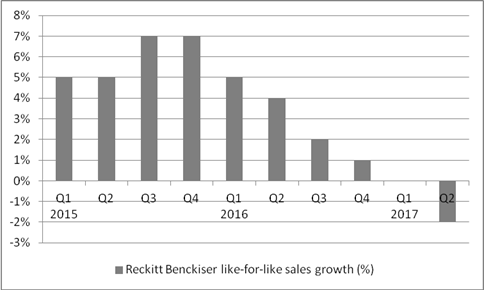 “Reckitt is working hard to rejuvenate its sales momentum. The company has completed the £13 billion acquisition of America infant nutrition company Mead Johnson earlier than expected and sold its food business for just over £3 billion (a sum that was much higher than forecast by analysts) to repay some of the debt used to fund the deal.

“It is also putting in plenty of effort to put a positive spin on the figures.

“The cyber-attack still feels like a bit of a limp and rather convenient excuse, especially as the deceleration in sales growth is hardly a new development but America’s Mondelez, the owner of Cadbury, also blamed shipping problems caused by the malware for a disappointing statement of its own, so it may not pay to be too cynical, for once.

“The figures that focus on continuing operations include Mead Johnson for two weeks but exclude Food for the whole quarter, even though the sale of Food was only confirmed in July, which could be seen as a little cute.

“At least the year-on-year growth rate in adjusted net income comes out at 14% on both counts, on an adjusted basis.

“More reassuring is the 14% hike in the interim dividend to 66.6p and bulls of the stock will point to this and the ongoing work to reshape the portfolio as reasons to own shares in Reckitt for the long term.

“Bears will growl about the full valuation, which means the stock looks like an expensive defensive and one where all three divisions are currently showing a drop in sales on a like-for-like basis: 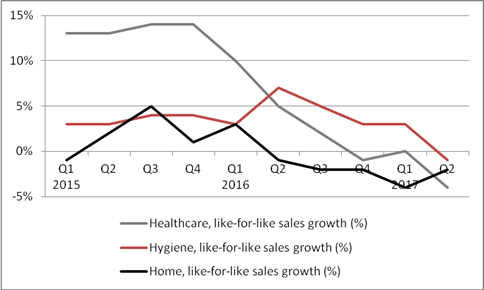 “A multiple of 23 times forward earnings for 2017 is a huge premium to the UK market and the 2.2% forecast dividend yield is a big discount.

“Neither makes Reckitt look particularly appealing to value hunters, especially as organic growth is proving so hard to generate and the company’s reliance on mergers and acquisitions to reshape itself brings execution risk, as well as a lot of debt.”