“It may not be a household name but the Philadelphia Semiconductor Index (known as the SOX) exerts a strong pull on stock markets around the world,” comments Russ Mould, investment director at AJ Bell.
25 January 2017
Share:

“The SOX is currently trading at a new record high and investors will therefore be pleased that the (silicon) chips are up, since the technology benchmark has historically been a good guide to where America’s S&P 500 index might go and by implication the world, as the US is the biggest and most influential stock market of all. 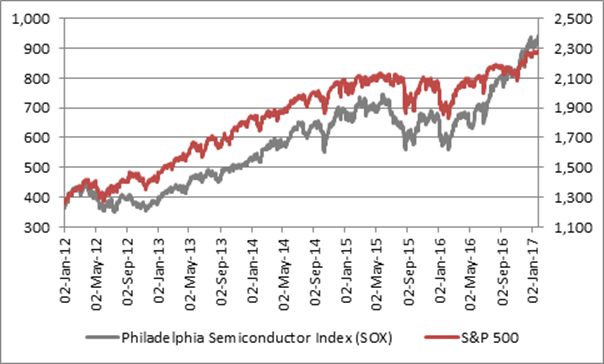 “Since the election of President Trump in November 2016, the SOX is up by nearly 14% against a 6.6% gain from the S&P 500 because silicon chip (and silicon chip production equipment) makers are seen as a good proxy for global growth - semiconductors can be found in almost anything, from computers to medical scanners, aircraft to cars and smart phones to smart-meters.

“Total silicon chip sales are estimated to have reached nearly $330 billion in 2016, up from $26 billion in 1986, and the SOX moved to a new peak of 942 yesterday on the back of strong fourth-quarter numbers from Texas Instruments, which flagged strong demand from the automotive industry as a key trend.

“Bigger tests now await the the 30-stock SOX, including results from microprocessor giant Intel on Thursday 26th  and then Apple, a huge consumer of semiconductors, on Tuesday 31st, since the computing and communications markets represent around two-thirds of global demand for silicon chips.

“In some ways the results have to be good. The SOX is up by 58% over the last year, even though global semiconductor sales are forecast to have dropped by around 2% in 2016 and are forecast to rise just 2% to $334 billion in 2017.

“The SOX index tends to pull markets lower as well as higher and good numbers are needed to justify its stunning 2016 gains, so investors should take heed if the benchmark begins to lose altitude. This could have wider negative implications for stock markets and also for particular UK stocks, even if  ARM, a one-time member of the SOX, is now part of Japan’s Softbank.

“Two stocks which seem to pay particular heed to the SOX include Renishaw and Spectris, the high-quality FTSE 250 precision instrument makers who count the semiconductor industry among their clients.” 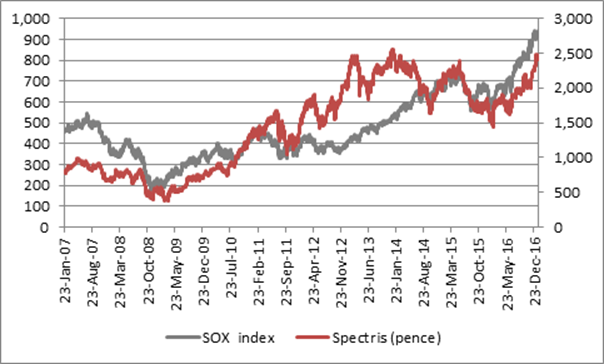 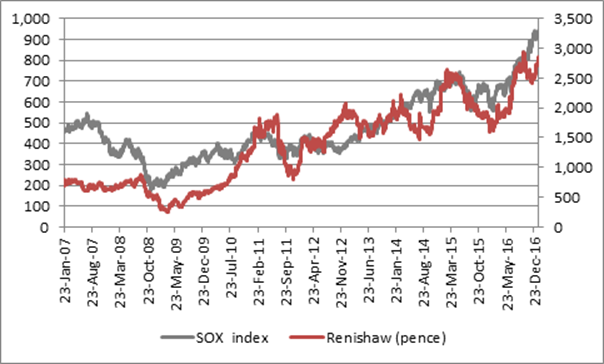