Tom Selby, senior analyst at AJ Bell, comments: “These latest figures continue to expose the damage caused by HMRC’s insistence on overtaxing savers when they first take taxable income from their pension using the retirement freedoms.

“The near £500million reclaimed through official forms is just a small part of the picture, however, with the vast majority who don’t jump through these Government-imposed hoops potentially having to wait until the end of the tax year to get their money back.

“It is incredible that more than four years on from the introduction of the pension freedoms we still have not had any public consultation on HMRC’s approach to taxing withdrawals.

“While clearly there are other priorities for the Government at the moment – most notably Brexit – it is unacceptable that this issue, which affects every person who accesses their fund for the first time, has been ignored.

“We know the current approach is causing huge confusion and in some cases financial hurt to people. The politicians who introduced the pension freedoms now need to take responsibility for making the tax system work for those utilising the flexibilities.” 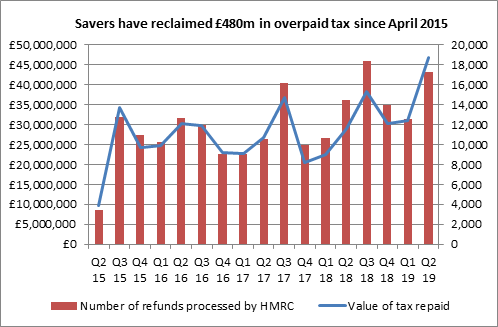