“Apple’s second-quarter results were another reminder of what a phenomenal company it is, as sales rose 9% year-on-year, earnings per share (EPS) grew by 10% and the company returned another $26 billion to shareholders through dividends and buybacks. However, investors are used to such excellence and producing yet another solid quarter may not really be enough for company that already carries a stock market valuation of $2.7 trillion,” says AJ Bell Investment Director Russ Mould. “It sounds harsh, but this may explain the relatively muted response to the results, especially as the outlook for the third quarter is cloudy – management’s warning that earnings could take a $4 billion to $8 billion hit from a range of issues implies that earnings per share could fall year-on-year for the April-to-June period.

“Analysts had already been looking for a year-on-year dip in EPS to $1.25 for Q3 and now Apple’s chief financial officer Luca Maestri is suggesting that silicon chip shortages, the withdrawal from Russia, currency movements and weaker demand due to lockdowns in China could cost the company between $4 billion and $8 billion in the form of lost revenues or higher bills in coming three months. Even for Apple, with $97 billion in sales, $30 billion in operating profit and $25 billion in net profit between January and March, that is a big hit. 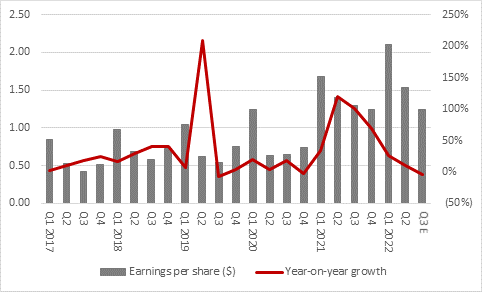 “It is possible that Apple will overcome these challenges by generating higher-than-expected sales from its high-margin operations. They excelled again in the second quarter as services revenues rose 17% year-on-year to $19.8 billion, a figure greater than sales from iPads and iMacs combined. Sceptics may wonder whether cash-strapped consumers will start to cut down on streaming services and paid-for downloads, but there is little sign of that at Apple at least, even if key rivals are finding the going a lot tougher, to again demonstrate the power of the app and developers’ ecosystem. 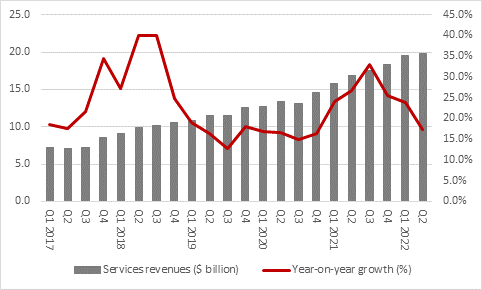 “Some of the hardware businesses are showing signs of a slowdown, as iPhone sales grew just 6% year-on-year and iPad sales dropped by 16%. Slower upgrade cycles may result if consumers do start to cut back on discretionary spending and component shortages will be a problem here, too. 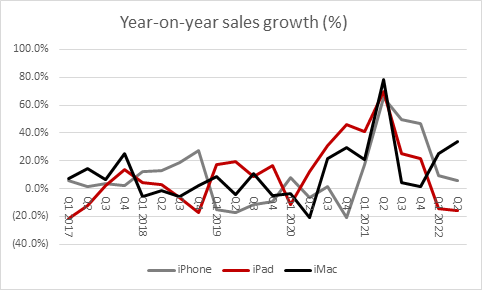 “But those services operations continue to drive cash flow, too. Apple generated another $18 billion of operating free cash flow in the second quarter and rewarded investors with $22.6 billion on buybacks and $3.6 billion of dividends. Another $90 billion share buyback programme was also given the green light, adding to the $612 billion Apple has already returned through dividends and buybacks since autumn 2012. 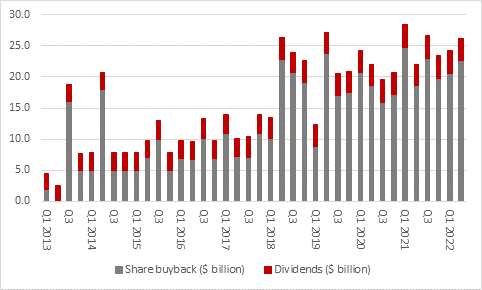 “That number looks phenomenal in relation to the current market cap of $2.6 trillion, let alone the company’s $600 billion price tag back in October 2012 when Apple began to return cash for the first time.

“Those numbers may persuade many long-term holders to stick with the stock, but whether the unclear outlook for Q3 is enough to get traders and momentum jockeys on board remains to be seen, given a lack of really new news and. They might not fancy looking through a down quarter in Q3, although short-sellers may retreat as the Q2s beat expectations and any moves on their behalf to close out positions could support Apple’s shares in the near-term.”