“After a positive pre-announcement from Page Group last week and an upbeat statements from Hays on Tuesday, Robert Walters is rounding out the updates for the January-to-March period in the same positive manner as its peers,” says Russ Mould, AJ Bell Investment Director. “Robert Walters’ shares are now trading at their highest level since summer 2018 as the recruiter flags improving momentum across all four of its major operating regions.

“Business levels may still be down from a year ago but overall fee income is now down just 11% year-on-year, on a constant currency basis, compared to the 34% year-on-year plunge seen at the nadir of activity in the second quarter of 2020.

“This confirms the same positive impression created by Page and Hays – Page even saw a year-on-year increase in fee income. 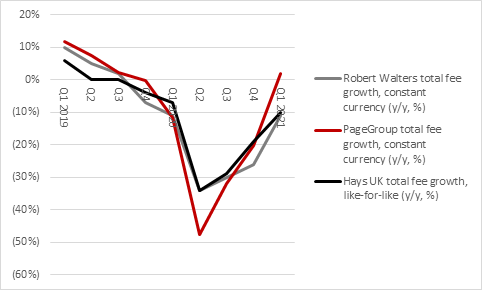 “Granted, fee income still fell at both Hays and Robert Walters, but the direction of travel seems clear. Robert Walters even saw a return to year-on-year growth in China, New Zealand, France and Spain during the quarter.

“Asia has generally been the best-performer for those recruiters with exposure there, while the UK is barely keeping pace with other regions, or even lagging them. These geographic variations reflect local infection rates and their policy responses that attend them, although even the UK is looking less bad than it did, which also offers some grounds for encouragement. In Robert Walters’ case, a 12% year-on-year drop in fee income marginally underperformed the constant currency overall slide of 11% but again the figure was far better than Q2 2020, when fee income plunged by 34%. 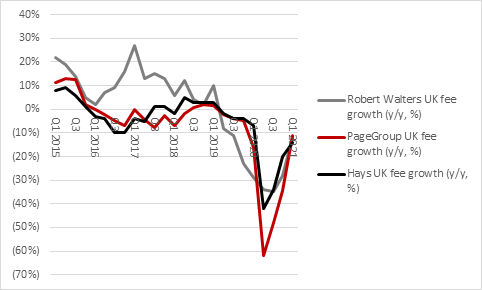 “Economists, politicians and investors alike will be looking for the UK to start catching up, especially as the lockdown begins to ease and the pace of vaccination remains rapid. After all, the UK’s underperformance of the group-wide growth rates dates back to Q3 2015 at Robert Walters and Page and Q3 of calendar 2019 at Hays, which really doesn’t say much for how the UK economy was doing even before the pandemic hit home.”