Scaffolding provider Arena Events has a wobble as profits disappoint

“A disappointing trading update has prompted a collapse in Arena Events’ shares, as the provider of temporary structures, scaffolding and seating at sporting events admits that higher-than-expected costs will more than offset the benefits of higher-than-expected sales at the UK operations,” says Russ Mould, AJ Bell Investment Director. “As a result, the shares have crashed below their summer 2017 flotation price of 55p and traded below 40p for the first time. 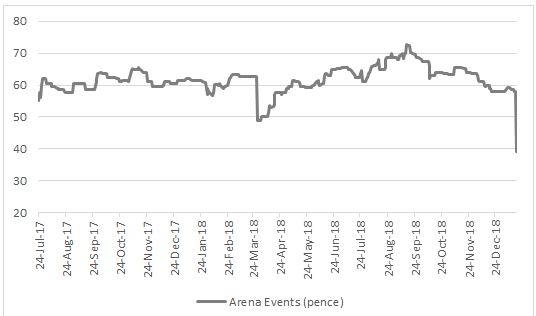 “Those investors who funded September’s £20 million capital raising at 60p a share, launched to fund acquisitions in California and Dubai, will be particularly put out since the company’s first—half results in September had given little indication that the AIM-quoted company, which also supplies temporary ice-rink facilities, would slip up quite so badly.

“Sales in the six months to June rose by 23% and stated operating profit moved out of the red and into the black, with a £0.3 million profit. Management even nudged up the interim dividend to 0.5p a share from 0.45p, as Arena supplied temporary seating structures to the Cheltenham horse racing Festival and the Royal Wedding in the UK, as well as America’s Super Bowl in Minneapolis, while it continued to work on multi-year contracts with the US PGA and Europe’s Golf Tour.

“However, management is blaming the profit shortfall on a number of one-off contracts and the costs associated with them, plus a delay in gleaning the full benefits of the planned integration of three warehouses in Britain.

“Management changes have already been made and Arena’s first job is to reassure investors that this is just a blip, and that profit margins can return to previous levels, although its decision to also take a ‘more conservative outlook for 2019’ may not help here, at least in the short term.

“If Arena can bounce back quickly, then the shares could recover but investors may take a cautious view.

“Firms which look to acquire at a time when they are already generating strong organic growth can sometimes find they have too much on their plate at one time, while management’s emphasis on ‘adjusted EBITDA’ as a key profit metric can sometimes be a red flag, as this allows a lot of wiggle room when it comes to the interpretation of the numbers – 2017’s ‘adjusted EBITDA’ of £10.6 million looks and sounds a lot better than the stated operating profit of £0.3 million and the statutory pre-tax loss of £2.9 million.

“This is not to pick on Arena Events in any way – so many companies are now referring to adjusted numbers first and stated numbers second – but investors must always ask themselves what costs and issues are being excluded to get to the ‘adjusted’ numbers and why management prefers this metric.

“Some costs may indeed be genuinely one-off items, such as Arena’s 2017 IPO expenses. But if they keep recurring then the word ‘exceptional’ can hardly apply and investors will then need to a look a little deeper.

“After all, adjusting the numbers does not necessarily make a company any better at what it actually does and going forward it would be reassuring to see the gap between adjusted and stated profits close.”