“Morrisons highlighted strong sales of fresh fruit and vegetables, beer, wine and spirits, as well as clothing, something which investors in Next may read with some chagrin.

“The Bradford-headquartered company added that (underlying) pre-tax profit for its whole financial year would exceed market expectations to reach between £330 million and £340 million. That would be the first increase in profits since 2011. (See chart below)

“Meanwhile Potts confirmed that net debt would fall to around £1.2 billion, down from £1.7 billion (and £2.3 billion two years ago).

“Lower debt means lower risk and lower risk can mean a higher rating for a stock, providing a welcome double-whammy for shareholders, as the market may now start to pay a higher multiple to access higher earnings forecasts.

“That said, the shares do not look unduly cheap on around 21 times forecast earnings, a big premium to the broader market, which trades on nearer 15 times, while the prospective 2.3% yield is less than the 4% offered by the FTSE 100.

“However, value investors will be intrigued to see that the company’s market cap and net debt come to £6.9 billion while tangible fixed assets on the balance sheet come to £7.1 billion.

“Supermarkets have been dogged by write-downs on their property assets (Morrisons took over £2 billion of charges on property impairments and lease provisions during 2014 and 2015) but if profits start to rise and valuations start to stabilise then the grocer may start to look cheap on an asset basis – just the sort of metric that could even attract a bidder to a sector that has in the past been characterised by the bid speculation that has sometimes swirled around peer Sainsbury, not least owing to the value of its property portfolio.” 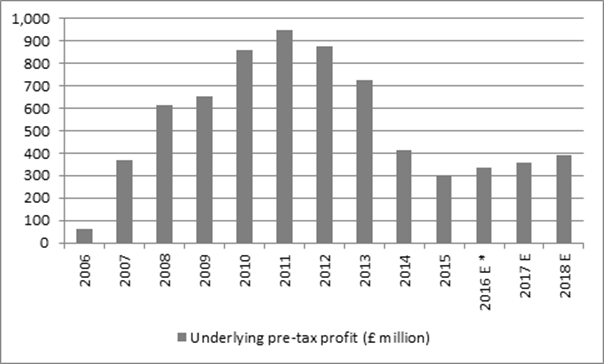