“Cult, US-listed stock NVIDIA, a firm often bracketed with the better-known FAANG stocks, has issued a second large profit warning in the space of three months, to once more catch out those brave enough to follow a strategy of ‘buy on the dips’,” says Russ Mould, AJ Bell investment director.

“The leading manufacturer of silicon chips had already warned for the fourth quarter alongside its Q3 results, when CEO Jensen Huang cited indigestion in the video consoles market and also a slowdown in demand from makers of Bitcoin mining equipment.

“At that point Mr Huang suggested fourth-quarter sales would come in around $2.7 billion, a gross margin at 62.5% with operating expenses of $915 million. That implied a 7% year-on-year drop in sales and a 28% year-on-year plunge in operating profit for the fourth quarter.

“The additional revenue shortfall looks to come from China, where demand for gaming graphics chips has disappointed, perhaps as a result of the regulatory crackdown on new video game licences, and also data centres. The latter confirms the gloomy picture painted by Intel last week and raises questions over demand for cloud computing equipment and services further up the supply chain. 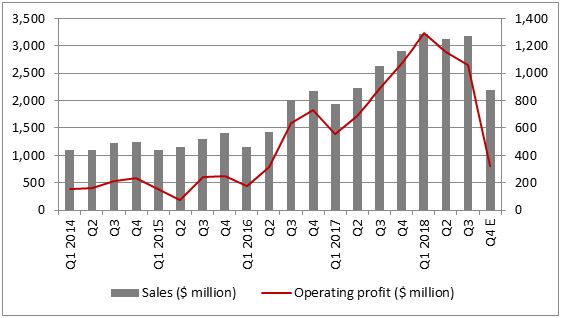 “A second big sales and profits miss is nowhere good enough for a stock sporting a $100 billion market cap and a forward price/earnings of 23 times, based on consensus estimates before today’s downward revision to earning estimates.

“No wonder NVIDIA’s shares are down 14% in early trading.

“This wipes out the gains may by dip-buyers since the start of the year and leaves NVIDIA down by more than half from its summer 2018 peak. 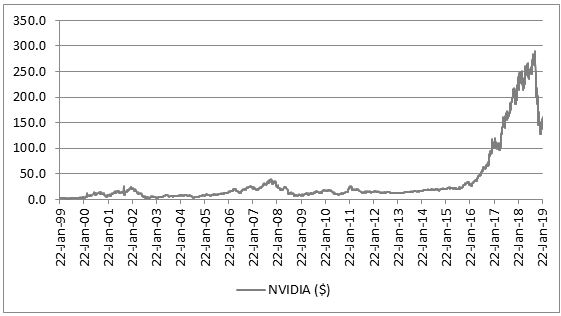 “Doubtless, NVIDIA will start to recalibrate its spending and cut operating expenses and capital investment to adjust to the new, less certain environment but that could start to ripple down the supply chain, with inevitable knock-on effects.

•    Is it time to keep buying on the dips? A bull run that is nearly ten years old has conditioned investors to use any share price weakness as a chance to pile back in but like all investment strategies this one works well - until it doesn’t. It may not be obvious from the long-term share price chart but NVIDIA’s shares fell by more than 80% in both of the 2001-03 and 2007-09 bear markets. A repeat this time would take NVIDIA back to barely $60 – still miles below the $137 share price.

•    Is this a stock-specific situation or indicative of wider problems for end-demand for silicon chips? It is tempting to say this is a situation that lies solely with NVIDIA, given the damage done by relative niche markets such as bitcoin mining equipment and the way in which it has begun to pile up inventory of unsold parts as demand has slowed. But NVIDIA has not been alone in warning of softer end markets. A string of Apple suppliers have coughed up disappointing results, including TSMC, Japan Display, Lumentum and AMS, as well as Apple itself and Intel has flagged weakness in the cloud and server food chain. All it needs is a big slowdown in auto demand and pretty much all of the $460 billion silicon chip industry’s leading client industries will be showing signs of weakness.

•    What, if anything, does this mean for stock markets more generally? Today’s trading alert shows that there are few worse investments than a growth stock where growth and earnings momentum disappoint. The scale of the profit warning, which leaves fourth-quarter earnings down by some 75% year-on-year, is a reminder that operational gearing works both ways: it means that profits can surge so much faster than sales when things are going well but also that they can drop so much more quickly when things go badly. That means the share price can just as easily plunge as rocket once momentum turns. Investors in Netflix and Tesla have already learned this lesson and it will be intriguing to see if Apple, Facebook and Amazon can offer some reassurance when they report their latest quarterly results this week.”