“While it is impossible to say that Britain has a spring in its step after the events seen in London and Manchester over the past three months, today’s third and final industry sentiment indicator for the month does at least suggest the economy is looking to recapture in the second quarter the momentum that it so clearly lost in the first,” comments Russ Mould, investment director at AJ Bell.

“Although the latest monthly CIPS/Markit services purchasing managers index (PMI) for the services industries came in at 53.8, below last month’s 55.8 and the consensus forecast of 55.1, the overall picture looks more encouraging, once last week’s manufacturing and construction readings are taken into account.

“A crude mathematical average across the three separate scores comes out at 55.5 for May, the joint best score since October 2015.

“The overall average score for the second quarter so far also handily outpaces the average seen for the first quarter. This will give hope to those who believe the weak Q1 GDP number, when quarter-on-quarter growth came in at just 0.3%, is a short-term stumble rather than the harbinger of a genuine downturn.

“The PMI indicators do seem to suggest that Q2 should see a re-acceleration in momentum, pending the results for June which could, potentially, be influenced by the result of this week’s General Election.

“Such a view could also support the FTSE All-Share in its quest to add to its run of new all-time highs, as the PMI readings do seem to exert some short-term influence on the index even if, in the end, it is long-term profits and cash flows which will dictate the performance of the shares of the benchmark’s members and therefore the index overall.” 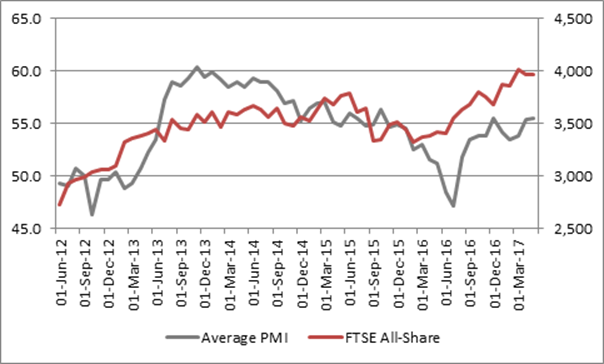