In the Jack Nicholson film Chinatown the powerful Noah Cross remarks that even ugly buildings become respectable if they last long enough, so it is perhaps only to be expected that FTSE 250 property play Shaftesbury is attracting a potential suitor, given its owns 14 acres of prime (and far from ugly) London property, including Chinatown, Soho, Carnaby Street and Charlotte Street.
23 May 2017
Share:

“Today’s interims re-affirm the attractions of Shaftesbury’s portfolio, as net asset value (NAV) per share rose 3% year-on-year to 912p, a figure way in excess of the 646p peak seen in 2007 just before the financial crisis hit home.

“The increase in the property portfolio’s valuation was helped by a lowly 3% vacancy rate and lettings, lease renewals and rent reviews which were concluded at an average of 5.6% above their September 2016 valuation.

“However, NAV growth has slowed markedly in the past year, perhaps owing to doubts over the impact of Brexit upon the UK economy and how the internet continues to put bricks and mortar retailers through the mangle – retail and restaurants represent roughly 70% of current income, compared to 17% from offices and 13% from residential property. 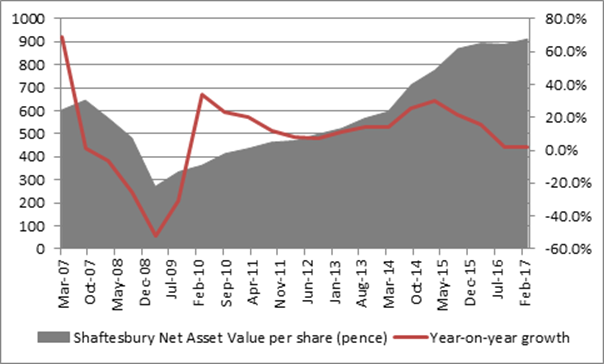 “This may give some pause for thought and even those who argue the UK will sail through, and benefit from, Brexit, will need to ponder Shaftesbury’s valuation. The stock trades on a premium to net asset value and has one of the lowest dividend yields for 2017 amongst its quoted peer group of Real Estate Investment Trusts.

Source: Price/NAV based on historic net asset value per share from company accounts. Dividend yield based on consensus analysts’ forecasts for 2017, from Digital Look.

“The premium to NAV will reflect the strong vacancy rate and London focus on the portfolio, especially as three recent major commercial property deals in the nation’s capital have all seen the sites change hands at book value or a premium to it (Canary Wharf, the Leadenhall Building and Vauxhall Square).

“In addition, Shaftesbury has little new development risk, compared to say British Land or Land Securities, despite £20 million of refurbishment work, and no exposure to the City, where Brexit fears are most heightened.

“Nevertheless, investors need to be wary of buying Shaftesbury stock solely on the basis of a potential bid from Samuel Tak Lee, even if the Hong Kong billionaire has acquired a near-20% stake.

“Talk of a bid from the same source in 2014-15 came to naught, while any further rally in the pound would make an approach more expensive for an overseas buyer.

“Potential acquirers might also choose to wait to see how the June General Election plays out, although the long-term attractions of investment in UK assets – rule of law, an independent central bank, a stand-alone currency, low corporate tax rates and in this case the tax-efficient REIT structure – could still drive interest in UK property over the long term.

“From this perspective, it may be that Samuel Tak Lee chooses to ignore the advice given to Jack Nicholson’s character, JJ Gittes, in the 1974 film to simply “Forget it, Jake, it’s Chinatown.”