“Tesla has already delighted its hard-core band of shareholders and supporters by announcing record production and delivery figures for the second quarter of 2019 but with the share price still a third below last summer’s high boss Elon Musk and his team still have a lot of work to do, starting with Wednesday’s Q2 results,” says Russ Mould, AJ Bell Investment Director. “For the long term, they must prove that they can used increased volumes to set Tesla on the path toward sustained profit and cash generation. More immediately Mr Musk will have to convince the doubters that the jump in second-quarter activity was not just the result of buyers getting in ahead of a reduction in US federal tax credits for buying an electric vehicle (EV).

“Sceptics of Tesla therefore argue that demand is currently being artificially inflated as would-be buyers look to lock in that fiscal perk and that once it expires production volumes and shipments will plunge, especially as Tesla faces an ever-growing number of credible rival EV (or hybrid) models, including Jaguar’s I-Pace, Audi’s E-Tron, Hyundai’s Kona and Nissan’s Leaf. Bulls of the stock will argue that Tesla has an edge in terms of brand and technology thanks to its first-mover advantage and that more competition will simply make the EV market even bigger than it would have been otherwise – to Tesla’s potential benefit. 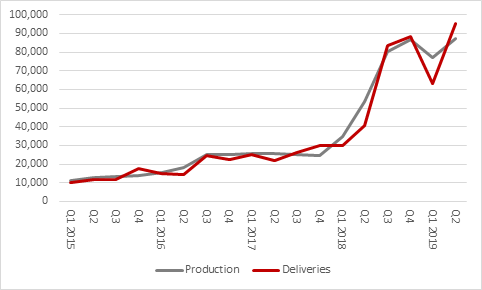 “Tesla’s second-quarter production grew by 63% year-on-year and deliveries surged by 134%, which is quite some achievement given the gloom which looks to be enveloping the global car industry, amid signs of weakening overall demand from consumers.

“But the firm is yet to convince the doubters that it can turn volumes into profits and cash flow. Mr Musk admitted to a year of ‘production hell’ in 2018 and after two quarters of profit last year - right when it needed them, so it had the cash to repay $1.1 billion in debt between November and March – Tesla then plunged back into loss in the first three months of 2019. 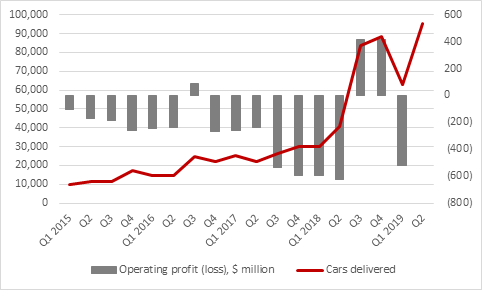 “Analysts do seem to be a little more circumspect in the near term, as they expect another loss for the second quarter, despite bumper production figures. After the first quarter’s shocking earnings per share loss of $4.10 (a setback which forced a profit warning out of the firm in January), Tesla is expected to make an EPS loss of $1.55 in the April-June period before a break-even third quarter and then a profitable end to the year. 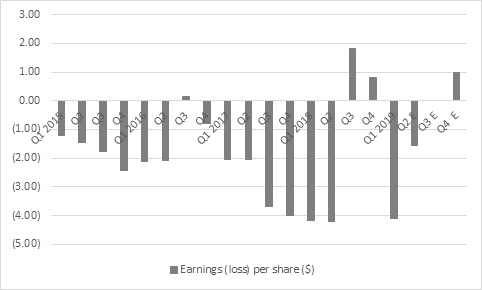 “That profitable fourth quarter is then seen by analysts as a springboard to huge advances in earnings in 2020, 2021 and 2022. The consensus forecast for 2022 is earnings per share of $24.08, enough to put the shares on barely 11 times forward earnings, a multiple that supporters will argue means the stock is very cheap, given its growth potential. 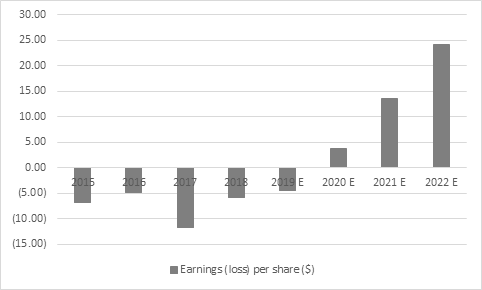 “Tesla has at least bought itself some time with May’s $2.7 billion fund raising, as even Mr Musk had to bow to the inevitable on that front, as the firm continued to consume cash. However, Tesla still added to its debt pile as it raised $860 million by selling new shares and $1.84 billion in fresh debt, a strategy which kept both bulls happy and bears interested.

“The combination of operational gearing (how small changes in sales lead to big changes in profit) and financial gearing (large amounts of debt) is a very high-risk one.

“Shareholders who believed in the Tesla story were happy to provide fresh cash. But the fresh debt will be a further burden on the profit and loss account, so bears will still growl about how the firm’s $46 billion market cap may still prove unsustainable, given the highly competitive auto industry’s high capital requirements and relatively thin margins, let alone the cash flow, execution and governance issues which have dominated at Tesla over the last 18-24 months.”