‘Latest figures released by HMRC show that the lion’s share of the money in stock market ISAs is invested in open-ended funds, though the proportion has come down a bit over the last ten years or so. The last available data shows that 69.6% of the pool of money in investment ISAs sits in open-ended funds, down from 75.3% in 2011/12.

“When stock market ISAs were first introduced in 1999, it was typically open-ended fund managers who provided savers with an ISA wrapper, which could only be invested in their fund range, and so the two were natural bedfellows. That was before investment platforms opened up the ISA architecture to allow funds from different asset managers to be held within the same ISA account, as well as other forms of investment. But it’s clear that open-ended funds still retain their popularity with ISA investors, albeit not to quite the same extent as ten years ago. But that is probably more to do with greater choice and information being available than a sign of disillusionment with open-ended funds per se.

“Open-ended funds provide instant diversification when compared to picking a share portfolio, and are useful for the many ISA investors who want to delegate stock selection to a fund manager. Investment trusts also offer the same benefits, and the proportion of ISA money held in these closed-ended vehicles has risen by 70% over the last decade. They still remain a minority sport amongst ISA investors though. Partly this may be because they are a bit more complicated and risky. Investment trusts are also de facto actively managed, and so won’t appeal to passive investors who want a plain vanilla tracker fund, a simple option which has become increasingly popular in the last decade.

“Investment in shares has remained broadly stable over the last ten years or so. But the proportion of stocks and shares ISA money held in cash has almost doubled, and now sits at 5.6%, up from 2.8% in 2011-12. There may be a number of reasons for that. ISA investors may well be more aware of the facility to park stockmarket ISA contributions in cash awaiting investment instructions, or they may simply be a bit more reserved about the market, or both. The proportion of ISA money held in cash actually peaked in April 2020 at 6.7%, and this obviously coincided with market turmoil around the onset of the pandemic, and it may be that some of that money is still waiting to be deployed into investments.”

“The increasing use of ETFs has also allowed some active investors to be more tactical with their investments, perhaps meaning they regularly hold more cash in between trades. The rise in investment trusts at the expense of open-ended funds may also play a part in the rising proportion of cash in ISAs. Dividends from open-ended funds can often be rolled up within accumulation units, without ever hitting ISA accounts, whereas investment trust dividends are paid to the ISA provider, where they sit as cash, awaiting instructions to be reinvested or paid out. Of course, the whole point of a stocks and shares ISA is to invest the money for long term returns, but while it has risen, the level of cash held is still modest enough to suggest it is transactional, rather than a long term strategy employed by ISA investors.

“Overall the total amount of money held across all asset classes in stockmarket ISAs has more than doubled from £189 billion in 2012 to £399 billion in 2021. That of course partly reflects the ISA contributions that have been made in the intervening period, but also the strong growth achieved by stockmarket investments over the last decade or so.” 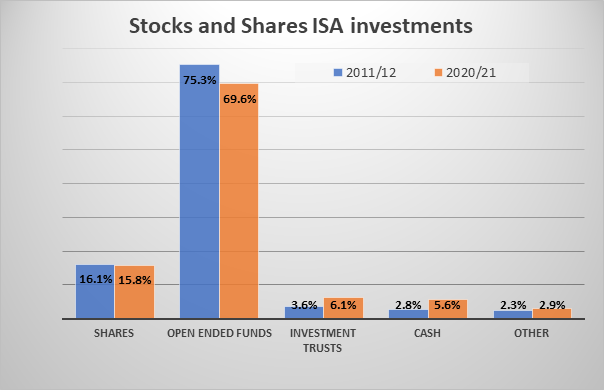 Most popular funds, shares and trusts in the AJ Bell Youinvest ISA

The following table shows the ten most purchased funds shares and trusts by ISA investors on the AJ Bell Youinvest platform in the ten years to the end of 2021.