“Today’s results from the UK’s two oil majors are better than expected, both firms are continuing to cut costs and investors will be particularly pleased to see maintained dividend payments as Shell and BP report their third quarter-numbers,” says Russ Mould, investment director at AJ Bell.
1 November 2016
Share:

“However, Shell’s shares are up 4% and BP’s down 2%. Shell is making much faster progress integrating its acquisition of BG than anyone hoped; while BP’s 5.9% year-on-year drop in production output does raise some concerns about the company’s long-term, underlying growth prospects (Shell came in flat excluding BG and up 25% including the purchase).

“The improved profits and lower investment helped both firms announce that they would maintain their quarterly dividends, at $0.10 for BP and $0.47 for Shell.

“This shows how sterling’s slide has helped both stocks to trade near 52-week highs despite the uncertain economic and oil price environment.

“The maintained dividend will help reaffirm the market’s faith that both companies’ dividend yields’ are reliable, at least for now. Based on consensus analyst forecasts, BP offers a yield of 6.8% for 2016 and Shell north of 7%.

“However, there is no room for complacency. BP is working to a budget of $50-55 a barrel of oil, Shell more like $60 and the OPEC production cuts agreement looks far from assured – Brent crude has dipped below $48. All eyes are now on the meeting scheduled for 30 November in Vienna to see if a deal can be reached and then whether OPEC’s members will stick to it – history would suggest the odds are against it.

“That means the oil firms will have stay lean and mean, especially as analysts are watching their debt positions. BP’s net debt is now $32.4 billion, Shell’s $77.8 billion, way higher than the start of 2015 on both counts. At least both have net-debt-to-equity ratios below 30% and Shell is planning to sell assets so it can reduce borrowing, but no-one will want to see a another sustained dip in oil prices as that could leave both firms having to borrow more if they want to keep their dividends unchanged.  That may work in the short term but can do damage to a company’s long-term position and growth prospect if debt inhibits investment for growth over time.” 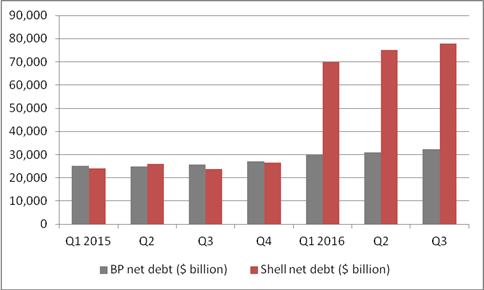