“With unemployment at 50-year lows, wages running near 10-year highs and the US stock market trading at a new all-time peak there initially seems to be little reason for the Federal Reserve to be considering interest rate cuts, but a collapse in US freight traffic suggests the central bank may have cause to be nervous about the American economy after all,” says Russ Mould, AJ Bell Investment Director.

“The latest data from the Cass Freight Index shows that shipments fell for the seventh straight month in June. That is the worst slump since the growth wobble of 2015-2016 and does suggest that trade tensions with China (and other commercial partners) are having an effect, especially as the sugar rush created by the December 2017 tax cuts starts to wear off. 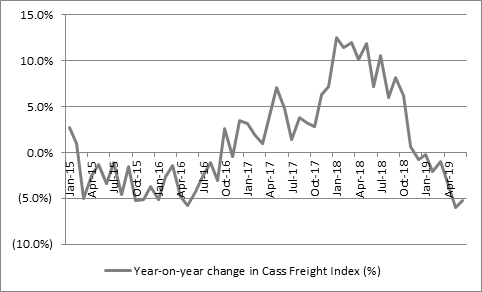 “The fact that America’s economy managed to overcome a 19-month slump in 2015-16 means there is no need for investors to panic, but it does suggest that they should be on their guard, as the S&P 500 equity index moves beyond the 3,000 mark for the first time.

“The start of a slump in freight traffic, as measured by Cass, in 2000 and 2007 heralded both a wider slowdown in US economic activity, as benchmarked by the ISM’s manufacturing purchasing managers’ index, and eventually a bear market in stocks.” 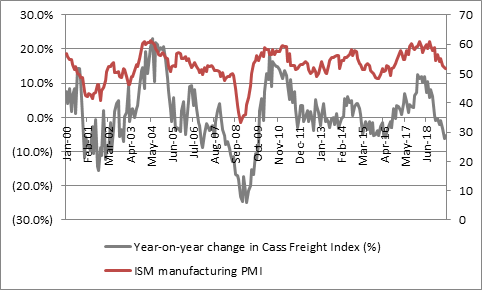 “This explains why investors need to pay just as much – if not more – attention to the Dow Jones Transportation index as the better-known Dow Jones Industrials average.

“This is because a strong economy will see goods being sold and vendors have to replenish inventory. This inventory must be manufactured and once made it must be shipped, via truck, plane or train. 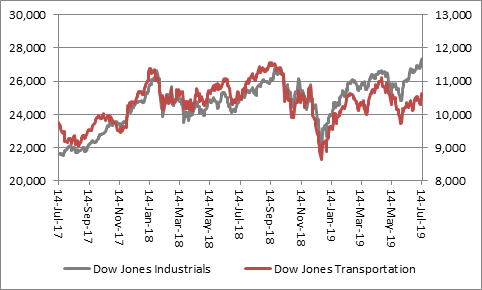 “After all, if the Fed does start to cut interest rates, and not just once but two or three times as markets seem to expect, then surely it will be doing so because the economy is going south. That would be bad for American corporate profits, where growth has already slowed markedly, and that could in turn leave US stocks looking very exposed from a valuation perspective.

“This is exactly what happened during the 2000-03 and 2007-09 bear markets, which even frantic interest-rate cutting from the American central bank could not prevent. 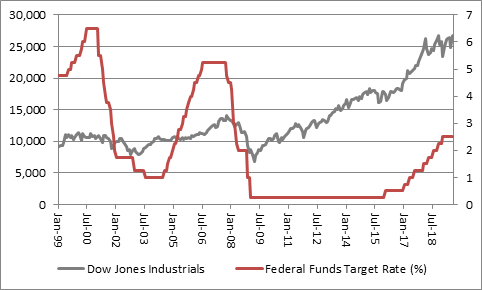 “Such a chain of events could be made less likely by a trade settlement between America and China or fresh fiscal stimulus from the White House and President Trump will be keeping a close eye on both the economy and the Dow Jones Industrials as the 2020 election draws nearer. There is always the chance that policies are crafted to maximise their impact ahead of the ballot.

“But for the moment, a trade deal seems no nearer than ever, despite the honeyed words that came out after the G20 meeting in Osaka, and the any spending package could encounter Democratic Party resistance on Capitol Hill in Washington, as the race to the White House starts.”