“Smurfit Kappa was the first FTSE 100 firm to restore dividend payments in 2020 and the packaging giant has delivered a further nice surprise to investors with an 8% increase in its final payment for last year,” says Russ Mould, AJ Bell Investment Director. “That takes the total distribution for 2020 to €1.94, including the €0.809 payment to fully cover 2019’s cancelled final dividend. The increase to 2020’s final dividend could mean that the current consensus forecast for 2021 looks a bit low. 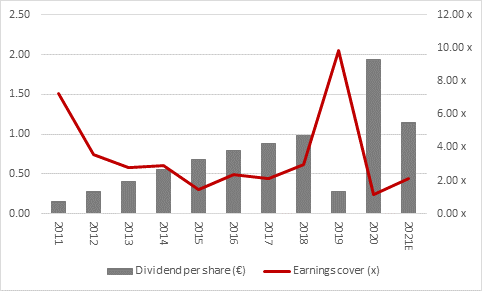 “Management may be keen to keep earnings cover above 2.00 times, the level which usually provides a bit of a buffer in case anything unexpected goes wrong, so that may stop dividend forecasts from racing away. Equally, sales and profits came in higher than expected for 2020 so further upside surprises in 2021 could give further scope to the dividend.

“The Irish-headquartered company continues to capitalise upon the inexorable rise of e-commerce. In addition, its business mix is weighted toward fast-moving consumer goods and so the company could benefit if and when the virus is contained, and economic activity starts to pick up in earnest. 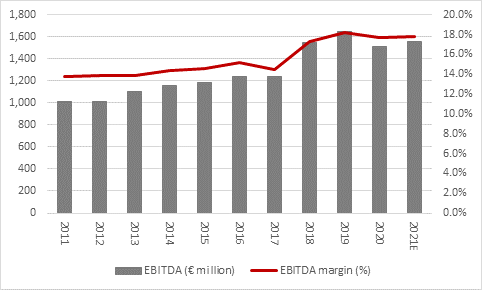 “Chief executive Tony Smurfit notes containerboard prices have been rising and how supply of containerboard has become very tight, for both kraftliner and testliner. As a result, further price increases may be on the cards and that could boost profit margins, even if input costs are on the rise too, notably energy. (All of this will doubtless be of interest to investors even if they do not own shares in Smurfit Kappa, as financial markets around the globe remain on a state of alert regarding inflation and continue to assess whether it is about to make its long-awaited return).

“Smurfit Kappa is not resting on its laurels, however. The firm booked a €35 million charge in the year to cover the cost of new efficiency drives and investment in sustainability, where it already has a strong record. The company recycles over six million tonnes of fibre a year and manages its own forests and, following an announcement last November, management is targeting a 55% reduction in carbon dioxide emissions by 2030 on the way to net zero by 2050.”

“Fifteen FTSE 100 firms have now restored dividend payments, having previously cancelled or suspended or deferred them. Smurfit Kappa was the first in July 2020 and Barratt Developments became the latest member of the UK’s corporate elite to do so when it declared an interim dividend of 7.5p per share the first week of February. Three more have stated their intention to restore payments this calendar year.

“Those 15 FTSE 100 firms have now announced the restoration of payments to a value of £2.8 billion. This is still dwarfed by the £39.8 billion of cuts announced by FTSE 100 members to date, but with payments of £31.3 billion having been retained, the balance between cuts and retentions and restorations is looking a lot better than it did.

“All eyes are now on the Big Five FTSE 100 banks, whose reporting season starts with Barclays on 18th February. The regulator effectively prevented Barclays, HSBC, Lloyds, NatWest and Standard Chartered from making dividend payments and they all cancelled their fourth-quarter or final dividends for 2019 and anything scheduled for Q1 to Q3 of 2020. Hints that dividend payments are now again permitted could see the banks return to the dividend list, depending upon their view of the economic outlook, especially as all protested a year ago that they had sufficient capital to fund returns to shareholders and weather any downturn.”