A closing overnight price of $16.99 means shares in Snap are now trading below their $17 flotation price, as technology stocks’ valuations come under fresh scrutiny.
11 July 2017
Share:

“The company’s stock has been publicly traded for exactly 90 days and Snap is now trading way below the closing peak of $27.09 reached on its second day as a public company back in March. 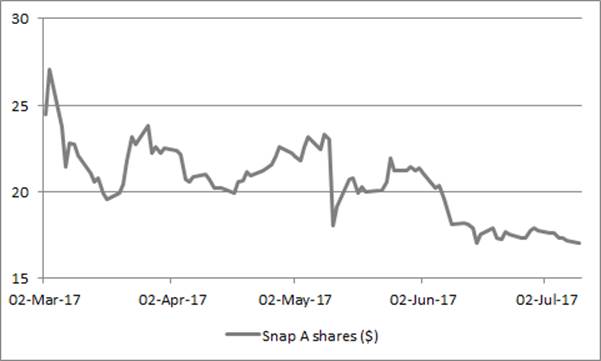 “Sceptics will be feeling a little less bewildered as a result, although they will still find it hard to justify the company’s $20 billion market valuation, given its disappointing first-quarter results (when the firm added just eight million daily active users, to take the total to 166 million), competition from Facebook’s Instagram service  and above all Snap’s heavy losses.

“Snap’s net losses surged to $514 million in 2016, from $373 million the year before, despite the increase in users and revenues. Ultimately, it is profits and cash flow and dividend payments that support and drive a company’s valuation, not just the number of customers it has and the offering prospectus even warned on page 19: “We have incurred operating losses in the past, expect to incur operating losses in the future, and may never achieve or maintain profitability.”

“It might not take long for supporters to lose faith in Snap if profits remain a distant prospect, especially if user growth remains slow, although a wider loss of confidence in US stocks would also be potentially problematic for the share price.

“US stocks are generally trading at or near record-highs, using a number of headline indices as a guide, although one or two doubts look to be creeping in.

“Note how the tech-laden NASDAQ looks to be losing momentum, as are the momentum-jockey’s fix of choice, the silicon-chip making stocks of the Philadelphia Semiconductor index (or SOX), which has in the past been an excellent guide to investor appetite for risk (and US stocks in general): 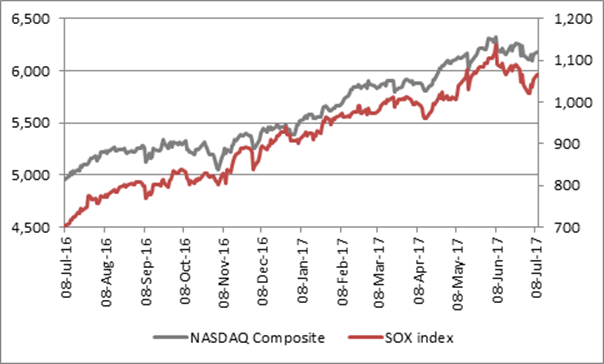