“One of the recommendations of the Hill review is designed to make it easier for Special Purpose Acquisition Companies (SPACs) to list on the London Stock Exchange amid fears the London market is missing out in favour of other markets, primarily the US. But one important set of people is not missing anything at all – and that is investors, because SPACs have stopped performing, at least temporarily,” says AJ Bell Investment Director, Russ Mould.

“This can be seen in the performance of the New York-listed Defiance Next Gen SPAC Derived Exchange-Traded Fund, or ETF, which trades under the ticker SPAK. It has lost 14% of its value compared to mid-February’s high. 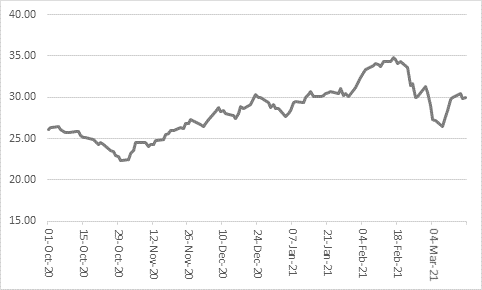 “The instrument is designed to track the performance of a basket of SPACs and then deliver that performance to its investors, minus its running costs and fees.

“Launched last September, the ETF has $71 million under management. Those assets are split 60-40 between companies that came to market via a SPAC and newly-listed SPACs which are yet to make an acquisition. New companies are screened monthly and new SPACs quarterly.

“Leading holdings include Draftkings, Opendoor Technologies, Pershing Square Tontine, Churchill Capital and Clarivate, as well as Skillz and Virgin Galactic and the ETF has 137 holdings in total – although some might be tempted to argue that is not necessarily a good thing.

“Granted, the diversified holdings list can help to protect investors from stock-specific risk and the danger that an individual SPAC goes wrong, if it picks the wrong target or overpays for its prey.

“But the surge in SPAC issuance raises another danger, namely that SPAC operators, be they established hedge fund managers, wannabes or celebrities jumping on a fast-moving bandwagon to make a quick buck. Then the risk is deal quality declines and investors who are just joining the SPAC chase now find themselves holding the bag.

“The Defiance Next Gen SPAC Derived ETF’s 14% slide over the past month may stoke such fears.

“Bulls will counter that this is just a pause for breath after an excellent start, as SPAC deal flow shows no sign of slowing. Sceptics will counter that this is part of the problem and flag Warren Buffett’s old warning about new stock market entrants: ‘First come the innovators, who see opportunities that others don’t. Then come the imitators who copy what the innovators have done. And then come the idiots, whose avarice undoes the very innovations they are trying to use to get rich.’

‘SPAC volumes deals continue to mushroom but fear of missing out (FOMO) is just about the worst possible reason for making any investment decision. To let this emotion drive a change in the rules with regards to SPACs in particular would potentially expose investors to greater danger and the risk of portfolio losses.

“Yes, the rules may make it easier for the entrepreneur to raise capital.

“Yes, it may increase the fee pool available to the City’s ecosystem of bankers, brokers, lawyers, advisers, auditors and accountant.

“But is what is good for the seller, necessarily good for the buyer? Could this dash to ease the rules work to the detriment of investors, especially private ones? The future performance of the Defiance Next Gen SPAC Derived ETF could be a useful guide.”