“Standard Chartered’s results confirm the trends shown over the past week by Barclays, Lloyds, NatWest and HSBC, despite the difference in geographic and business mixes between the big five FTSE lenders,” says AJ Bell Investment Director Russ Mould. “But investors are clearly unconvinced that the banks are out of the woods, as the shares of all five trade well below their official, stated net asset – or book – value per share.

“Either the markets are unsure whether the banks can genuinely make sustainable double-digit returns on equity (owing to regulatory pressure, competition from fintech rivals or the unpromising backdrop presented by a heavily indebted world), or they think the net asset value figures are too optimistic, or the banks are simply screamingly cheap.

“Standard Chartered’s profits were up sharply – thanks in the main to lower loan impairments or even their reversal – while net interest margins showed signs of stabilisation and loan growth showed some encouraging signs of momentum. Standard Chartered also declared an interim dividend and a second share buyback scheme.

“Similar trends were evident at Barclays, Lloyds, NatWest and HSBC, as all drew some benefit from the post-lockdown economic upturn, a return to some degree of consumer and business confidence and the absence of any fresh interest rate cuts from central banks.

“According to the website www.cbrates.com, there has been 34 rate rises and just seven cuts from central banks this year and most of the increases have been in emerging markets, where the prospect of inflation is being taken more seriously than it is in the West. That could conceivably offer a little succour to Standard Chartered and it helps to explain why CEO Bill Winters suggests net interest margins may finally be hitting bottom (along with the prospect of rate cuts into negative territory fading in the West).

“Improved momentum in the loan book could also help. Standard Chartered was the only one of the five FTSE 100 banks to show faster growth in loans than deposits in Q2.

“The absence of – and reversal of – loan impairments also boosted earnings nicely, even if Standard Chartered was perhaps a little more conservative than its peers.

“Uncertainty over the direction of the Chinese and Hong Kong economies hang over HSBC and Standard Chartered, both of whom also could end up as the meat in the sandwich between Beijing on one hand and Washington and its supporters on the other. Both banks could end up in the uncomfortable position of trying to keep Chinese clients (and politicians and regulators) happy while also trying to appease Western calls to keep up the economic (and political) pressure. Asia represents two-thirds of group earnings.

“That may be one more reason why Standard Chartered’s shares look cheap in absolute terms, and relative to those of its peers, on a book value basis, even allowing for Bill Winter’s medium-term goals of 5-7% annual income growth from 2022 onwards and a double-digit return on tangible equity over time.

“A strong, inflationary economic upturn on a global basis could be the catalyst that the shares need. After all, some of the best returns from shares can be made when a situation goes from terrible (as it was in 2020) to merely less bad, even if potential structural challenges remain and banks may face plenty of those, as debts pile up and fintech rivals line up around the world. 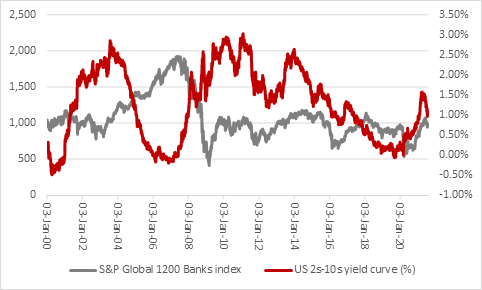 “The S&P Global 1200 Banks index has rolled over of late – as has Standard Chartered’s share price – and one factor here may have been a loss of faith in the inflation trade in the face of new variants of COVID. That has in turn seen bond yields turn lower and yield curves flatten.

“If the economy does pick up speed, bond yields rise and yield curves steepen, that should in theory boost the lenders’ incomes and fatten net interest margins. It is less clear what would happen to loan books, as there must be a risk that even small increases in borrowing costs could get some debtors into trouble given the scale of the globe’s debts, but history does at least suggest that steeper yield curves are good for banking stocks.

“In the absence of growth, then banks will need to offer yield to entice investors. Standard Chartered cautiously declared a dividend of $0.03 for the first half and added to its first $254 million buyback of the year with another $250 million programme.

“If Standard Chartered meets the consensus forecast of a $0.20-a-share dividend this year, that would be worth around $625 million, with buybacks of at least $1.04 billion on top. That would be a total cash return of around $1.6 billion, or £1.1 billion at current exchange rates, the equivalent of a 6% cash yield.”