Hundreds of thousands British graduates are facing the student loan conundrum – pay off the loan as quickly as possible or just pay the minimum amount for 30 years?

All the figures are based on £50,000 of student debt (the average according to the IFS) and assume the salary rises by 3% each year. 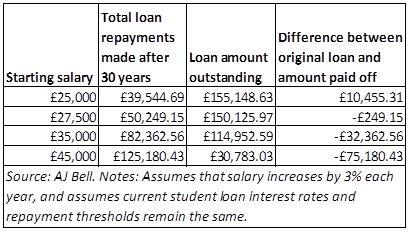 Someone who starts on £25,000 will not clear their original debt after 30 years. They will pay off £39,545 of their loan, but interest will mean that the loan debt has grown to £155,149. However, over the 30 years they will have paid off less than their original loan amount, so it wouldn’t have made sense to pay off the loan early.

Someone who started on £35,000 would see their salary ultimately rise to £82,480 after 30 years. Because they are a higher earner, they would be paying higher interest of 6.3% and so the interest accumulated each year would be more than their annual loan payments. After 30 years they would have paid £82,363 in loan repayments, but their debt left to pay would still be £114,953 (which would be wiped out). Because they have paid off far more than they originally borrowed they would have been better off paying off the loan early if they could have.

Someone who started on £45,000 would see their salary ultimately rise to £106,045 after 30 years. As above, because they are always paying the highest level of interest they see their total loan outstanding rise for the first 15 years of their employed life, as the interest accumulated each year would be more than their annual loan payments. After 30 years they would have paid £125,180 in loan repayments, but their debt left to pay would still be £30,783 (which would be wiped out). Because they have paid off far more than they borrowed – £75,180 more to be exact – they would have been better off paying off the loan early if they were able to.

“There’s no easy answer or calculation you can do to work out whether you’d be better off repaying your student loan with a lump sum once you graduate – or indeed not taking one out in the first place – or whether you’re better off just making the repayments until it’s wiped out after 30 years.

“High earners will be hit with the double whammy of the highest interest charge, currently at 6.3%, and high repayments each month, currently at 9% of any earnings over £25,000. It means those with the highest salaries will end up repaying far more than they initially borrowed over the 30 years of the loan. But at the other end of the spectrum, someone who never earns more than the £25,000 repayment threshold won’t pay back a penny of their loan and will see the entire amount wiped out after 30 years.

“It’s impossible for most graduates to accurately predict what they will earn in the future, how fast their salary will rise and whether they will take any career breaks, which in turn makes it pretty tricky to work out if you’re better off paying off the loan – assuming you or your parents have the spare cash.

“The other unpredictable factor to student loans is that you are at the mercy of changing Government policy. The 30 year lifetime of the loan is a long period and future Governments might decide to change the interest rates charged or the threshold at which you start to repay, either moving in your favour or against you. They might also decide to extend the 30 years – or indeed make it shorter and wipe out the loan sooner.

“One thing that is certain is that the student loan system is fiendishly complicated. From determining what interest rate you’re being charged based on your salary, to getting an accurate calculation of what you actually owe, the process is nigh-on impossible to navigate easily.

“Something graduates should bear in mind is that once they have overpaid on their loan, they can’t get the money back. It doesn’t work like a savings account where you can take the cash out again at a later date if you need it, once it’s paid off its gone, so you need to be sure you’re not going to need the money for anything else. You also need to bear in mind that these loans don’t work like other debt. If you lose your job then you don’t have to continue paying it back, or if you take a pay cut your repayments will reduce too.

“Of course, all of this focuses purely on the financial aspect of loans and not the emotional effect of having this huge debt weighing over you. Some argue that you should just view the loan repayments as a 9% ‘graduate tax’ and ignore the loan figure or interest rate, but many don’t find it so easy to ignore the giant sums involved.”

Laura Suter is personal finance analyst at AJ Bell. She is a multi-award winning former financial journalist, having specialised in investments. Laura joined AJ Bell from the Daily Telegraph, where she was investment editor. She has previously worked for adviser publications Money Marketing and Money Management, and has worked for an investment publication in New York. She has a degree in Journalism Studies from University of Sheffield.
Follow us: