“Investors in Netflix will be breathing a sigh of relief after the media services provider handily beat subscriber growth forecasts for the third quarter and raised expectations for the final three months of the year,” says Russ Mould, AJ Bell investment director. “Bulls of the stock market more generally will also be delighted, especially if Netflix’s shares regain some momentum as a result of the subscriber figures.

“The FAANG stocks – Facebook, Apple, Amazon, Netflix and Google’s parent Alphabet – are all trading some way below their year highs and the NYSE FAANG+ index has fallen 14% from its peak.

“They had provided market leadership before the autumn stock market stumble and history suggests that they will need to post fresh gains and take the lead again if the broader indices are to keep progressing and the bull market is to keep running.

“Netflix’s addition of seven million subscribers in the quarter to September may therefore ease a few nerves after the disappointment of the 5.2 million additions between April and June. Management’s forecast of 9.4 million adds in the final three months of the year may also provide some cheer. 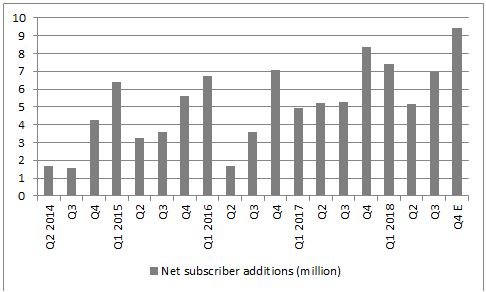 “Netflix pays for and develops content as a fixed cost, so the more subscribers it has, the lower the costs relative to revenues and the higher its profits and cash flow.

“This explains why Netflix’s profits continue to surge. The company made $481 million at the operating level in the third quarter, up from $462 million in the second quarter and $209 million in the same period a year ago.

“That new quarterly high for the company shows the operational gearing it generates as subscriber numbers grow and the company generates additional sales from created or acquired content which is already a sunk cost – although some will quibble that the $18 million quarter-on-quarter uplift in profits came entirely from a $92 million drop in marketing expenditure. 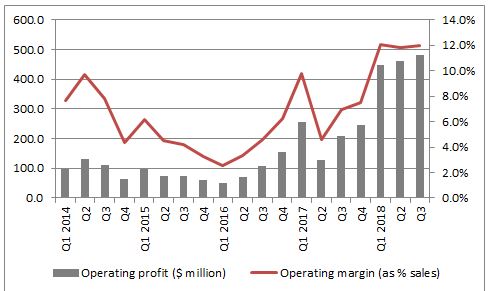 “Some will quibble that the $18 million quarter-on-quarter uplift in profits came entirely from a $92 million drop in marketing expenditure, while a tax credit boosted the bottom line, too.

“But those numbers compare to a $167 billion market cap, after the post-market surge yesterday – so the shares trade on more than 90 times earnings for 2019 (compared to a multiple for the S&P 500 of 16 times, according to Standard & Poor’s research).

“In addition, the company is still burning cash and piling up debt as it funds the development of its content library and thus customer acquisition.

“Netflix spent $3.2 billion in the second quarter alone on programming and as a result the net cash outflow was $690 million. That represented a record quarterly cash out flow even as the firm made record quarterly profits – so even some 21 years after its creation, the firm cannot generate the cash that ultimately pays the bills and sets the basis for its shares’ valuation. 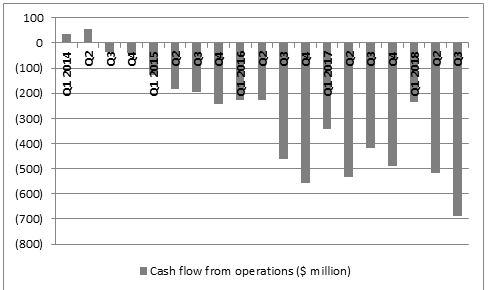 “The company is currently making up the shortfall with debt. Net debt has mushroomed from $300 million in March 2016 to $5.3 billion now and that is before billions in committed future spending relating to content streaming deals. 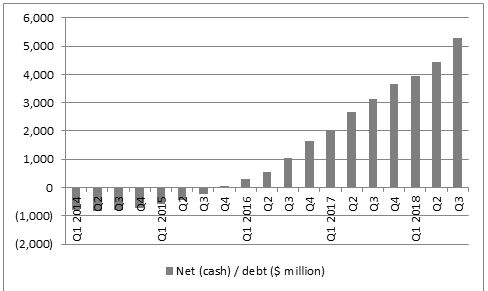 “If subscriber growth should ever slow down on a sustained basis then profits and cash flow will come quickly under pressure, especially the quarterly $108 million interest bill would still have to be paid, leaving that huge market capitalisation potentially exposed on the downside.”