“One major potential attraction of the FTSE 100 is its prospective 4.7% dividend yield for 2019, given that analysts are expecting the index’s members to distribute a record £92.2 billion to shareholders in ordinary dividends this year,” says Russ Mould, AJ Bell investment director. “But a growing band of companies is also paying out special dividends which further boost the attraction of UK equities to income-seekers: in 2018, a dozen firms made special payments worth some £6 billion, the highest figure ever seen from the current crop of FTSE 100 members. 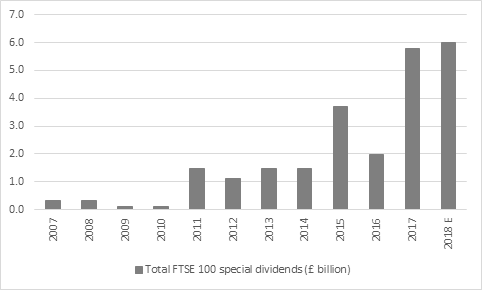 “That tidy sum topped up the £87.2 billion paid out in regular dividends by some 7% and added 0.3 percentage points to the UK’s dividend yield, a welcome addition to portfolio returns for income-seekers and one that will have put more of a gloss on the FTSE 100’s disappointing capital return in 2018.

“By their very nature, special dividends cannot be relied upon, even if firms such as Direct Line, Admiral, Barratt and Taylor Wimpey are now building up a streak of such payments. But BHP has got 2019 off to a fast start, with its $1.02-a-share (79.5p-a-share) special payment in January and it is possible that others may follow.

“Bulls will see this possibility as part of a contrarian bull case for UK equities, which underperformed their global peers once more in 2018, to perhaps leave them unloved and therefore undervalued. 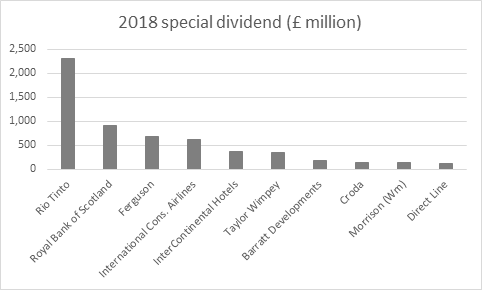 “But not everyone will warm to the special dividends trend. Direct Line cut its special payment to 8.3p a share from 15p in 2018 and Next made no such distribution in 2018 having handed over 590p a share in special distributions over and above its regular ones between 2014 and 2017. Nor has ITV made a special payment for the last two years having made four in a row between 2013 and 2016.

“Sceptics will also question the durability of the special payments from housebuilders in the event that the rules for Help-to-Buy are refined, even if they do have net cash balance sheets, and argue that it is easier to decline to pay a special dividend than it is to cut a regular one. It could also be the case that a special dividend is not designed to be a return of excess cash which management does not immediately require following a disposal or unexpected windfall, but an attempt to curry favour with disgruntled shareholders – Marks & Spencer’s June 2016 4.2p-per-share special now looks like a waste of money, especially in light of the cut to the regular dividend for the year to March 2019 now promised by chairman Archie Norman and chief executive Steve Rowe.” 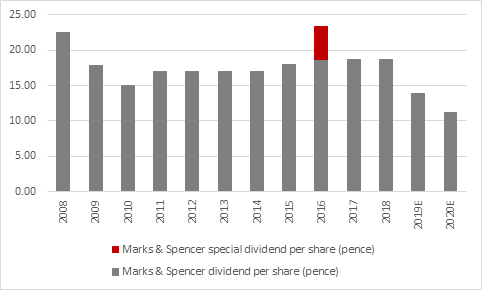