“Consumers will be delighted to see an unexpected drop in the rate of annual inflation, to 0.9% in October from 1.0% in September.  However, they may start pinching their wallets when they see a 12.2% leap in producer price input inflation and a 2.1% increase in producer output prices, as these figures show what may come through the pipeline in the coming months (see chart below).

“There is no guarantee that producer price inflation will feed all the way down the chain, as corporations may decide – or feel obliged – to hold their prices and take a hit on margin instead.  In addition, the pound could rise and oil could sink, undoing two other key influences on the rise of input costs.

“So whilst it is likely that we will see inflation increase this year and into next, investors should be wary of pricing in too much too soon. If oil and sterling do prove only temporary effects, this will wash through the numbers in a year’s time, while long-term deflationary forces such as debt and demographics remain as potent as ever.” 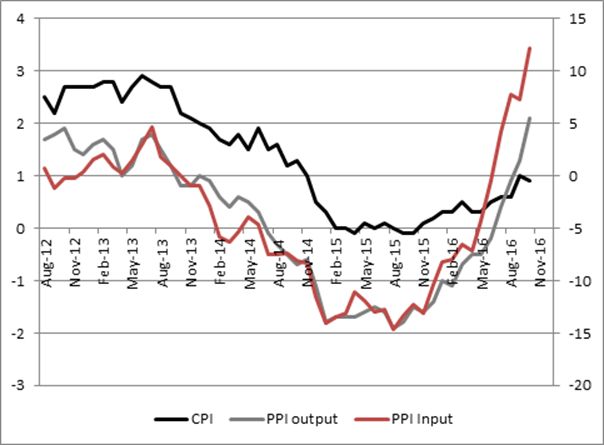