“Talk Talk’s 8%-plus dividend yield at yesterday’s close looked like it was in “too good to be true” territory, especially as earnings cover for the pay-out was less than one times.  But, the cut in the 2018 dividend to 7.5p (from 10.29p in the year just ended) is deeper than expected and that explains why the shares are receiving such harsh treatment this morning.

“However, executive chairman Sir Charles Dunstone and new chief executive officer Tristia Harrison have done the right thing, freeing up cash to invest in the business and tackle the company’s debts.

“The shares still yield more than 4.5% after today’s share price plunge and the proposed reduction in the dividend to 7.5p next year.

“That figure may catch the eye of income-hunters, especially as the company has arranged new debt facilities, the new management team is already reviewing the mobile telecoms strategy so it is less cash hungry and Talk Talk can point to a return to growth in its customer base in the fourth quarter, to suggest it may be getting over the reputational damage done by 2015’s cyber-attack.

“This is not to say a turnaround in the company’s profit momentum will be easily or quickly achieved. The market remains fiercely competitive, as evidenced by a fresh 1.3% decline in average revenue per user (ARPU) and the profit warning for 2017-18 dished out by Dunstone today, which implies underlying profits could drop by up to 10% in the year ahead as Talk Talk invests heavily in winning new customers and improving its service.

“At least shareholders know that Dunstone has every incentive to succeed on their behalf.

“As the founder of the business from his Carphone Warehouse days he still has a 30% stake (so the dividend cut decision will not have been taken lightly) and his record shows that he has never been afraid to buy or sell assets.

“It may therefore only be a matter of time before analysts start to ponder whether Talk Talk is a potential bid candidate.” 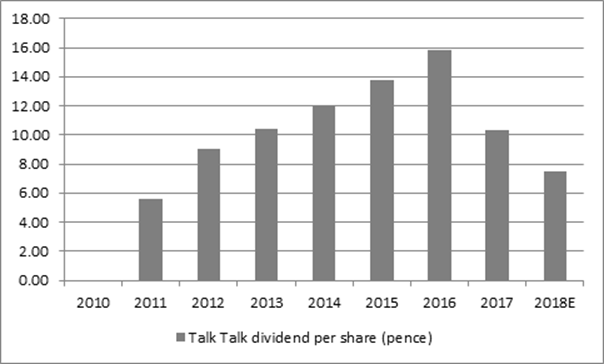