Taylor Wimpey shares slide back to where they were in … 2008?

“You can see why investors might be nervous about housebuilders, given worries over interest rates, sagging consumer confidence and rising input costs, and they seem to be shrugging aside reassurances from Taylor Wimpey that its key financial goals are attainable over the medium-term,” says AJ Bell Investment Director Russ Mould. “Legitimate as all those concerns are, contrarians will note that Taylor Wimpey’s shares are trading no higher than they did back in January 2008, when it felt like the world was about to end, even though the company is in much better financial shape now that it was fourteen years ago. 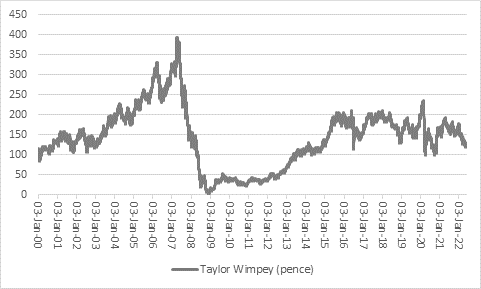 “Taylor Wimpey’s shares have gone nowhere fast since 2015, as investors have perhaps taken the view that the housing market was in some ways a false one, where demand was artificially supported by record-low interest rates and Government support (or interference, depending upon your point of view) in the form of multiple versions of Help to Buy and then the stamp duty tax break of 2020-21. 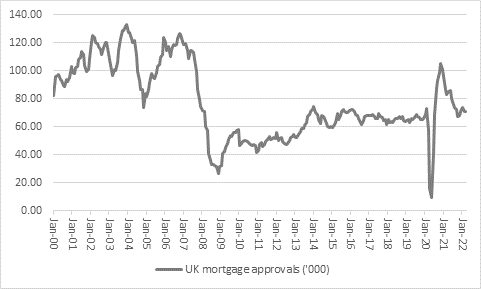 Source: Bank of England
This could be down to the potent combination of record-high house prices (the Halifax House Price index average of £286,079 represents nine times the average UK wage of £31,980, including bonuses, according to pay data from the ONS); rising interest rates; and the toll that inflation is taking on consumer spending power and confidence.

“According to consultants GfK, UK consumer confidence languishes at a forty-year low, and the Major Purchase index is back near where it was when the pandemic was at its height. 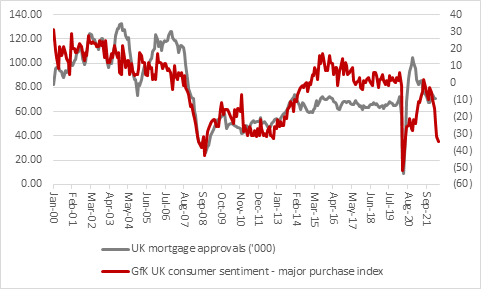 “The slide in mortgage activity is dampening sentiment toward the share prices of the listed housebuilders, although the Government’s Developer Pledge regarding remediation costs for cladding on buildings that are more than eleven metres tall is a contributory factor, too. The total bill is now £1.9 billion and Taylor Wimpey’s contribution here is £245 million.

Source: Company accounts. *Based on mid-point of any guidance range provided by management. Berkeley is yet to disclose any figures although it signed the Developer Pledge Letter on 5 April 2022.

“However, Taylor Wimpey’s robust finances means that even this £245 million hit is perfectly manageable. Analysts expect the FTSE 100 firm to rack up a record operating profit of £900 million in 2022, on £4.5 billion of sales, a figure which is just lower than the all-time high of £4.7 billion registered just before the Great Financial Crisis in 2007. 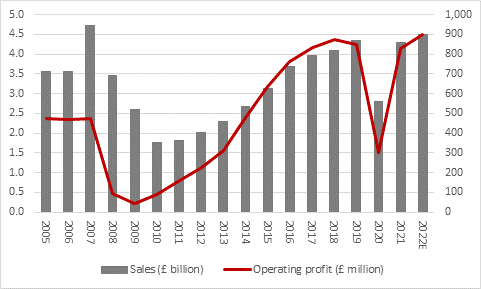 “That operating profit equates to a margin of 20% and at the meeting for analysts and investors Taylor Wimpey is reiterating its goal to reach a return on sales 21% to 22% over time. The company’s operating margin peaked at 21.4% in 2018. 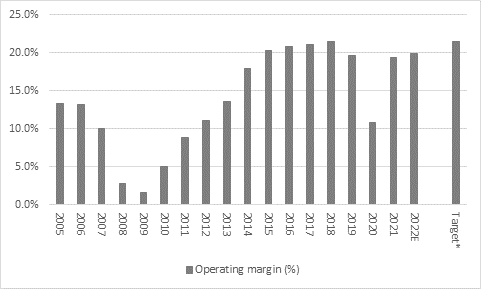 “In addition, Taylor Wimpey ended its last financial year with £837 million in net cash on its balance sheet. That is a huge contrast to 2007 when the firm entered that steep downturn with £1.4 billion in net debt, in the wake of the Taylor Woodrow-George Wimpey merger.

“As such, the company is much better prepared for the housing market downturn which its share price already seems to be factoring in. The shares trade no higher than fourteen years ago, even though there is no comparison between current trading and the collapse that was under way back then.

“Taylor Wimpey’s shares are trading at barely one times historic net asset, or book, value and that figure should as profits roll in. Value-hunters may also be intrigued by how the £4.5 billion market cap is backed up by £4.5 billion of inventory and £0.9 billion of cash, while the firm has just £148 million in liabilities relating to loans, pensions and leases, although the Builders’ Pledge costs come on top of those.

“The net result is some may be tempted to argue that Taylor Wimpey’s shares are cheap, on an earnings, yield and asset value basis, especially if the Government’s nerve cracks and it offers further extensions to Help to Buy, or some other form of assistance, as the next General Election, presumably in 2024, draws ever nearer.”