Three “Black Swans” that could ruffle calm markets in 2018

The statistician and philosopher Nassim Nicholas Taleb gave the name “Black Swan” to an unpredictable, even highly improbable event that could have an unforeseen extreme impact, and with global financial markets enjoying a period of remarkable calm investors need to be on the look-out for possible shocks to make sure they are not caught off guard in the year ahead.
27 December 2017
Share:

“Markets are always at their most dangerous when making money seems easiest and healthy returns from global equities in 2017 mean that there is a danger that investors are lulled into a false sense of security, especially as volatility has been remarkably low,” says AJ Bell Investment Director Russ Mould.

“The FTSE 100 has moved higher or lower by more than 1% in any given trading day just 16 times this year, the lowest number in over 20 years: 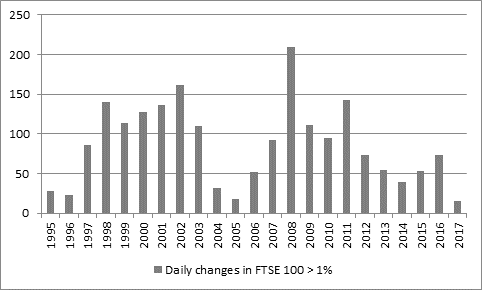 “It is noticeable that volatility rose sharply from the previous low in 2005, reaching a crescendo three years later, and this suggests that investors need to keep up their guard. It can be argued that liquidity and leverage (debt) are even more plentiful now than they were before the great financial crisis, so to spot what (if anything) could go wrong in 2018, investors need to look at what could take away liquidity and again expose the world to its hefty borrowings.

“Such events are the sort of “Black Swan” which could surprise markets and there is a chain of three interlinked events which could stir the markets out of their current complacency.

“The market is trying to have it both ways by buying into the global reflation/growth narrative and doing so without pricing in any risk of inflation.

“Unemployment rates are near multi-decade lows in the UK, US, Germany and Japan (4.3%, 4.1%, 3.6% and 2.8% respectively) and if tight labour markets do finally prompt higher wages and a wider, faster advance in broad inflation readings then there could be trouble ahead for two reasons.

“The first is companies will have to invest in fresh capacity, or more staff, or higher pay, or all three. Corporate profit forecasts do not factor in such a rise in costs, especially in the USA, where investors are paying what is a high price by historic standards for what are historically lofty profits and margins – valuations leave little margin for error.

“The second is that central banks may start to tighten policy more quickly than the markets currently think. 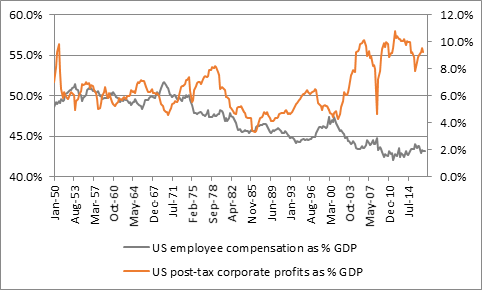 2.     Central banks pick up the pace of monetary tightening

“The pace of change is slow – but if wages pick up and inflation does the same then central banks could be forced to move more quickly, raising rates and tapering QE.

“In the real world, even higher borrowing costs could be a burden, given that global indebtedness is at least a third higher than it was in 2007, according to research from McKinsey, at $200 trillion or probably more.

“In the financial world, higher rates and less QE (or even QT) mean less liquidity and less cheap cash with which to buy assets. Central banks’ reducing their asset holdings rather than increasing them will be a test for bonds and equities alike, especially the latter, which have benefitted from a perceived lack of alternatives when it comes to asset allocation in a low-inflation, low-yield, low-growth world.

“There looks to have been a possible link between the asset-buying schemes of the Bank of England, Bank of Japan, European Central Bank, Swiss National Bank and the US Federal Reserve and global stocks in the QE years, so it will be interesting to see if that link holds in the event of a bout of QT.

“Higher wages and costs would expose bullish profit forecasts and equity valuations, which would be further pressured by higher interest rates and QT that would increase borrowing costs and increase the burden of the globe’s huge debts.

“That takes care of leverage and a sell-off in bond markets could do a lot of damage to liquidity, especially given the popularity of bond funds and especially bond tracker funds, or exchange-traded funds (ETFs).

“ETFs are useful tools, as they are cheap and can provide diversified access to a range of assets via just the one instrument. They also offer the prospect of liquidity as they are traded on exchanges.

“But the bond market is not liquid. It is an over-the-counter (OTC) market and one where regulatory pressure is deterring banks from making a market or committing their own capital to facilitate trading.

“If wages, broader prices and interest rates rise, that is a bad recipe for bonds, where lowly yields could be offset by both inflation and any capital losses suffered – since bond prices fall as interest rates go up. That could inflict a lot of pain on bond ETF holders who have either been seeking “safe” yield from sovereign or investment-grade corporate debt or chasing yield from the high-yield or junk market and may find themselves unable to sell easily at the price they want when they would like to.

“Hefty losses here could knock a hole in global liquidity flows, dampen investor sentiment and choke off appetite for the corporate debt which has been used to fund the share buybacks and takeovers which have helped to support stock markets.

“A good proxy for bond-market sentiment is the iShares iBoxx High Yield Corporate Bond ETF. On the three occasions since launch that its price has dipped below $85 this has been a sign of growing financial distress and market unease (2008, 2011 with the Greek crisis and 2016 after the collapse in oil). The ETF currently trades at $87 having traded in a very tight range throughout 2017.” 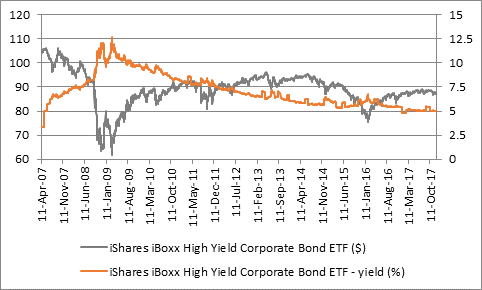