“Friday 23 July marks the one-hundredth anniversary of the first meeting of the Chinese Communist Party, but whether investors and financial markets can welcome the centenary with pleasure remains more of a moot point, even putting aside their ideological differences,” says AJ Bell Investment Director Russ Mould. “The benchmark Shanghai Composite index stands some 15% above the levels reached just before the news of the pandemic seeped out of the Middle Kingdom in early 2020 but it trails well below the peaks reached in 2007 or 2015. Investors make take some persuading that the index deserves to get back there in a hurry, for three reasons.

•    President and General Secretary of the Communist Party, Xi Jinping, marked the anniversary of the party’s foundation on 1 July with what many in the West saw as an aggressive speech as he warned any foes would be met with a “wall of steel.”

•    China continues to intervene in financial markets, often in not-so-subtle ways. The crackdown on internet giants such as Alibaba and Meituan, and cybersecurity investigation into ride-hailing app Didi immediately after its stock market flotation in the USA looked like expressions of displeasure with a trend toward overseas listings and a reminder to entrepreneurs of who was really boss.

•    China’s second-quarter GDP growth figure of 6.7% year-on-year undershot economists’ forecasts. This perhaps serves as a reminder that China is trying to combat the economic fall-out of the pandemic and keep the economy going on one hand, yet seeking to avoid letting financial markets, asset prices and debt get out of hand on the other. Beijing and President Xi are hardly on their own in this respect – the UK, USA, the EU, New Zealand, Australia and Canada are also members of what is a hardly exclusive club – but political legitimacy perhaps rests most fundamentally upon economic progress, employment and increasing prosperity than it does in China than anywhere else, not least because the authorities really have no-one else to blame if anything goes wrong. 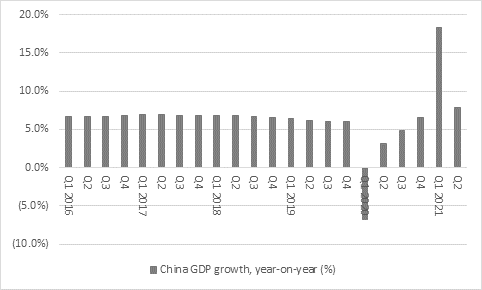 “Granted, China has a relatively low government debt-to-GDP ratio of 67% but that number is rising quickly. Moreover, the opaque structure of Chinese State-Owned Enterprises, let alone the so-called shadow banking system, mean the overall national debt-to-GDP figure is a less healthy 270%, according to China’s own National Institution for Finance and Development. 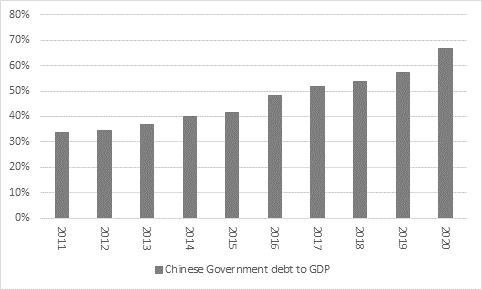 “China may therefore be generating growth, but the quality of that growth looks questionable, given its reliance on fiscal stimulus and cheap debt. This is perhaps a timely reminder that investors should never use macroeconomic data alone when it comes to selecting stocks, indices and funds (be they active or passive) to research and follow.

“In the interests of balance, it must be noted that China’s currency is trading relatively strongly against to the dollar, after a six-year slide, so markets may not be too worried about the economic foundations (although again the US faces the same challenges). 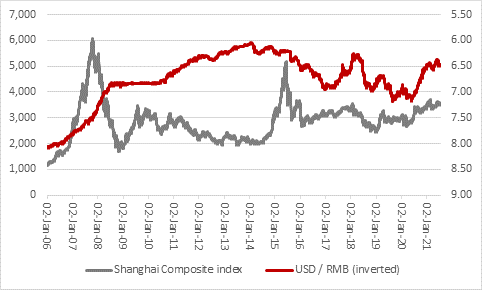 “Geopolitical risk is something which with all investors must live but there is little they can do about it, barring factor it into the risk premiums they demand when buying assets in certain countries – or in plainer English, pay lower valuations to compensate themselves for the potential dangers involved. Sino-American relations remain strained, to say the least, as Beijing and Washington wrestle for supremacy in key industries, notably mobile telecommunications and semiconductors.

“This is prompting talk of a new Cold War, a view perhaps supported by President Xi’s powerful speech on 1 July. Investors will be hoping it does not spill over into a hot war over Taiwan, for example, whose strategic importance is only heightened by the global semiconductor shortage.

“But if investors can do little about geopolitics, they can do everything when it comes to corporate governance, either on their own or by paying a fund manager to do the donkey work for them. And perhaps the greatest concerns lie here, at least when it comes to Chinese equities.

“Beijing’s indifference to the damage done to Didi Chuxing’s share price in the wake of the security investigation and assertion that US regulators cannot check Chinese audits of firms with listings in America is a big red flag (if you will pardon the expression). No-one, from a private individual to a trained fund manager, can invest in a firm if audited, verifiable and reliable accounts are not available.

“This reminder that China has its own agenda – one that is designed to preserve the Communist Party’s hegemony well beyond the first hundred years – affirms that investors’ needs are secondary. They are welcome to keep buying stakes in Chinese firms, or funds which track Chinese indices or own Chinese equities, if they wish. But they need to be sure they are paying suitably lowly valuations to accommodate the potential risks, which should also be in keeping with their overall tolerance levels.”