The most startling market reaction to Theresa May’s decision to call a General Election is sterling’s rally to around $1.28 and movements in the currency markets may well shape short-term market movements in the run-up to 8 June.
20 April 2017
Share:

“The dominant post-referendum trading theme since last summer has been “pound down, stocks up,” with overseas plays and dollar earners leading the way and domestic plays lagging. If sterling does continue to rally, investors may choose to focus on those sectors that have been neglected since the Brexit vote because of their reliance on the UK economy – namely general retailers, food retailers and the real estate plays. 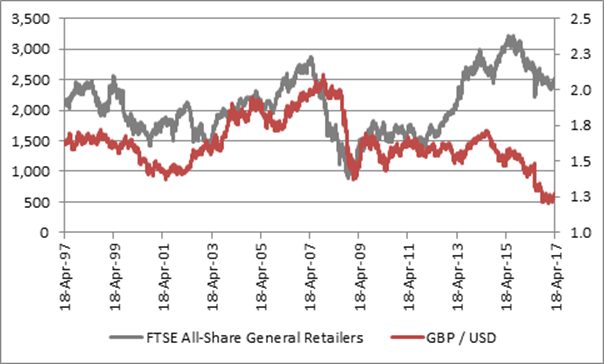 A similar pattern can be seen with regard to the UK Food & Drug Retailers sector, where Tesco, Sainsbury and Morrisons are the key quoted players. 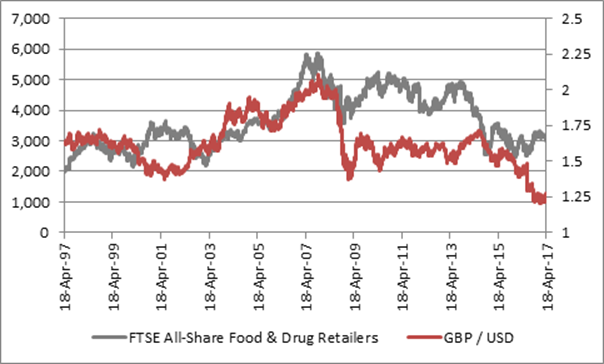 This is not to say long-term issues such as competition from the internet and the battle between bricks and clicks, let alone the challenges to general retailers posed by unhelpful demographics and the concept of “peak stuff,” have gone away. But in the short-term the noise created by the currency markets may tempt traders into action and trump long-term considerations. 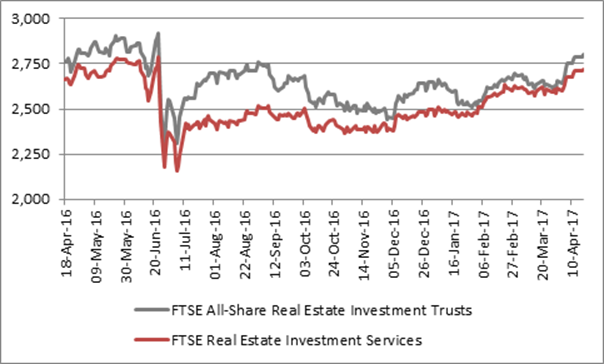 Besides a focus on the pound (and the prospect that its rally may cool inflation and even further delay any increases in interest rates from the Bank of England) there are three other possible reasons REITs in particular could be starting to make a comeback:

1.    Falling bond yields. A fresh plunge in UK Government bond yields may be serving to highlight the REITs’ income attractions, as no fewer than nine of them offer a dividend yield of more than 4% for 2017, based on consensus analysts’ forecasts. By contrast, the Bank of England’s reticence over raising interest rates and doubts over the sustainability of the spring surge in inflation have combined to drag the UK 10-year Gilt yield from a February peak above 1.4% back to barely 1.05%.

2.    Encouraging transaction activity. The full-year reporting season passed without major incident, as net asset values (NAVs) held up well (and certainly much better than the shares did last summer) and the widely-feared collapse in rents in the face of new supply failed to materialise. News flow this spring has also been encouraging. In the past month alone:

3.    Attractive valuations. Many REITs still trade at big discounts to net asset, or book, value, to suggest they may still be too cheap, in light of the deals outlined above.

* Excludes effect of Vauxhall Square sale which will add 3.5% to NAV

In the 1990-92 recession discounts to NAV reached around 40% but the tax rules were different then – property developers paid 20% tax on asset sales whereas the REIT structure is much more tax-efficient (REITs pay no tax so long as at least 90% of net profit is then distributed as dividends to shareholders).

As such the current discounts with no tax bill look similar to the depths of the early 1990s recession and so a lot of bad news has already been priced in – even if that bad news in the form of rising vacancies, falling asset values and falling rents has yet to materialise.

There is a risk that a sudden jump in sterling dampens overseas interest in British assets – all three of the transactions above involved overseas buyers and the takeover bid speculation at Chinatown-owner Shaftesbury involves a Hong Kong-based billionaire. But the UK still offers a rule of law and an independent central bank while a strong (or at least more stable) currency could reaffirm the long-term appeal of UK commercial property to potential buyers.”