“A spike in the US 10-year bond yield above 3.2% appeared to be behind the latest bout of market jitters as investors fret about the risk of a policy error by the US Federal Reserve – either it leaves interest rates too low for too long and lets the US economy boil over, or it moves too fast and stifles (or snuffs out) growth,” says Russ Mould, AJ Bell investment director.

“The benchmark Treasury bond yield has dipped back below that 3.2% threshold, but stock markets have yet to recapture their poise. To help investors work out whether the October stumble is just a healthy correction, the beginning of the end or just the end of the bull market, they might like to keep an eye on three stock market indicators in particular as we head towards the end of the year.”

“They are the Dow Jones Transportation index, the Philadelphia KBW banks index and the Philadelphia Semiconductor index (also known as the SOX). All three can be easily followed online for free.

Richard Russell’s ‘Dow Theory’ argues that if the economy is doing well, the transport stocks will do well, as goods are being sold and therefore new supplies must be shipped.

Between 1995 and 2017, the Dow Jones Transportation index has fallen on an annual basis eight times and the S&P 500 has fallen in the same year on six occasions. The only exceptions were 1998 and 1999 when – it could be argued – the tech bubble (and very loose Fed monetary policy) persuaded investors to ignore the warning given by Transport stocks.

In 2018, the Dow Jones Transportation index is now down by 0.5% for the year, having given up all of its gains in the second half. This compares to a 2.9% gain in the S&P 500 so bulls will be looking for the Transport stocks to show some momentum as we drive toward the end of the year. 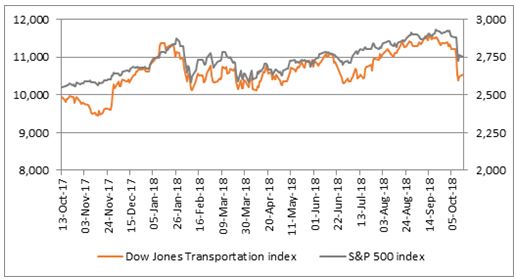 Both the economy and the financial markets need healthy banks if they are to really thrive so a relatively feeble performance from the Philadelphia KBW Banks index is a concern.

Between 1995 and 2017, the Philly KBW Banks benchmark has fallen on an annual basis nine times and the S&P 500 has fallen on five of those occasions.

The exceptions include 1999 – also when the tech bubble was running at full throttle – and 2007, just before the Great Financial Crisis broke. Lesser declines came in 2005 (a flattish year for US stocks overall as the Fed tightened monetary policy) and 2009 when the US was starting to emerge from the worst crisis in a generation. 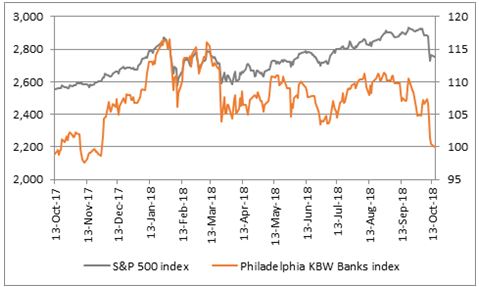 The Philadelphia Semiconductor index, or SOX, contains 30 companies who are involved in the design, manufacture and sale of silicon chips and it is therefore a very useful guide for investors on two counts.

First, these integrated circuits are everywhere, from smart phones to computers to cars to robots, so they offer a great insight into end demand across a huge range of industries and therefore the global economy.

Second, chip-makers’ and chip-equipment makers’ shares are generally seen as momentum plays, where earnings growth is highly prized and valuation less of a consideration. As such they can be a good guide to broader market appetite for risk.

Between 1995 and 2017, the SOX benchmark has fallen on an annual basis nine times and the S&P 500 has fallen on six of those occasions.

The exceptions were 2004 (when the Fed began to steadily increase interest rates) and 2006 and 2007 (just ahead of the Financial Crisis).

So far in 2018, the SOX is down 0.9%, having been up by nearly 14% at its year high back in June. It could be a positive sign if the chip stocks, beloved by momentum investors in particular, were to bounce back as the year draws to a close. 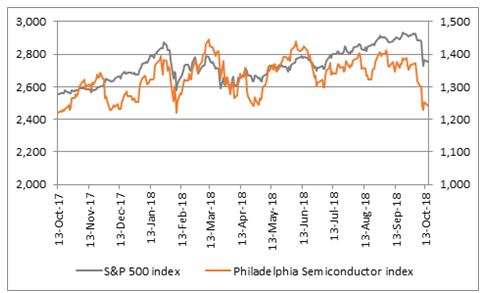