Tom Selby, senior analyst at AJ Bell, comments: “Four years on from the introduction of the pension freedoms reforms and we are finally getting a clearer picture of how people are using the flexibilities.

“On the whole the available evidence points to savers acting in a sensible manner, taking steady incomes from their funds rather than raiding their nest eggs and splurging in a way which could leave them struggling in later life. AJ Bell’s own research on this subject also suggests, in the main, withdrawals are being managed in a sustainable way.

“Of course there are no shortages of potential headwinds threatening investors, from the increasing threat of a no deal Brexit to the ongoing tensions between Donald Trump and China.

“Anyone who remains invested in the stock market and is drawing an income in retirement needs to be mindful of these risks and consider the impact a severe drop in markets – and any corresponding fall in the value of their fund - could have on their future spending plans.

“This risk is particularly prevalent where savers are taking large withdrawals in the early years of retirement, which is why it is critical people using the pension freedoms are engaged and regularly review their retirement strategy.” 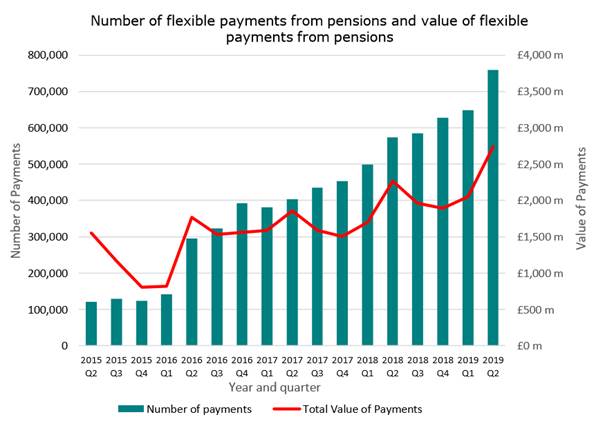