“Investors are warming to a shift away from retail and leisure sites across the portfolio of real estate investment trust (REIT) Town Centre Securities, which, under the guidance of key shareholders the Ziff family, continues to buy, sell and re-purpose its assets”, says Russ Mould, AJ Bell Investment Director.

“Shareholders will also be relieved to see in the first-half trading update increases in both occupancy rates and like-for-like rents, despite eight CVAs or insolvencies across Town Centre’s tenants, especially as six of the affected sites have been re-let to new tenants and with higher rents than before.

“Granted, the shares still trade at a 40% discount to the historic net asset value per share figure of 384p, to suggest that the Ziffs have more work to do if they are to convince shareholders that the discount to NAV will be closed by a rising share price rather than a drop in the value of Town Centre’s assets. The company’s NAV per share did fall by 41% from peak-to-trough between 2006 and 2009 when the financial crisis hit and the UK fell into recession, after all. 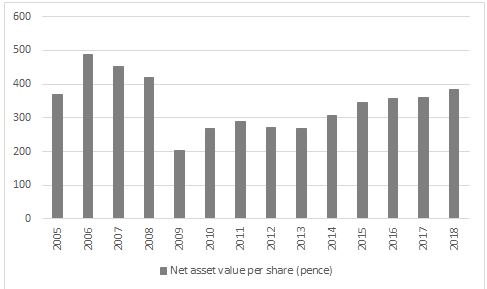 “The yawning gap between the stated book value of Town Centre’s assets reflects concern that even a reduction in retail and leisure from 70% of the group’s total portfolio to 52% over the last three years may not be enough to shelter it from the High Street’s woes, wobbly consumer confidence and any potential post-Brexit fall-out – concerns which today’s solid results at least go some way to addressing.

“Sixty per-cent of Town Centre’s assets are in Leeds, with 15% in Scotland, 13% in Manchester and 8% in London.

“As of June 2018, offices represented 18% and hotels and car parks 7% each, with residential 3% but it is interesting to see how this mix is changing markedly across Town Centre’s new developments, which represented 9% of the portfolio as of last summer’s financial year end.

“Of the 17 developments, where one was underway and four were at the detailed planning stage, none were purely retail and seven were purely residential, in Leeds and Manchester.

“This mirrors a trend seen in the interim results published in late 2018 by the major London-based REITs, Land Securities and British Land.

“Land Securities outlined plans to develop sites in NW3 and W12 in London as mixed-used sites, including residential development. The scheme in NW3 includes over 1,000 homes and that in W12 some 700. Ground could be broken in 2021, while a site in Lewisham is also subject to a feasibility study for a mixed-use development site.

“British Land is looking to develop its Canada Water asset as a Build-to-Rent site, while properties in Bromley-by-Bow, Ealing, Aldgate and Woolwich provide potential for 4,000 to 5,000 units in total, such that residential property could represent some 10% of the firm’s asset mix in over five years’ time.

“Perhaps this is one potential long-term catalyst to unlock value in the REITs’ portfolios and reduce the discount to net asset value, which remains historically high for those companies which have particular exposure to retail, the City of London, major new development projects or a combination of all three.

“Of those three brushes, Town Centre is tarred by just its retail exposure, given its London exposure is suburban and its development pipeline worth less than 10% of its assets, according to the last officially published valuation.

“To truly convince the doubters Town Centre will need to prove that it can hold or grow its net asset value figure, despite the High Street’s troubles. The swift replacement of troubled tenants in the first-half of its financial year is at least a step in that direction.